Madagascar Wiki
Register
Don't have an account?
Sign In
Advertisement
in: Episodes, Episodes focusing on Recurring Characters, The Penguins of Madagascar Episodes
English 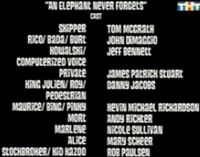 The penguins help Burt sneak out of the zoo to exact vague and non-specific revenge.

The penguins are doing a Sunday combat driving course, with Private being the driver, Rico firing blow-darts and Kowalski in drag screaming as the cliché woman with a baby and Skipper complimenting when Burt interrupts.

Burt wants the penguins to help him break out of the zoo. So they make up a plan to distract Alice. The penguins use a decoy and disguise Burt as an ice cream truck. Unfortunately, the lemurs think that he is a real ice cream truck.

Burt gets mad and breaks open the gates. Then the penguins find papers on the wall behind a stack of hay. Many years ago, a kid liked to scare the animals with his kazoo. Burt was bothered the legendary Kid Kazoo.

The penguins find Burt in a building. They think that he is trying to crush the adult Kid Kazoo with his butt, but he really wants to give him his old kazoo back.

Finally the penguins disguise Burt as an art museum, which is actually a piece of art that was on the wall of "Kid Kazoo's" apartment with squiggles painted on it so that they can send Burt back to the Central Park Zoo.