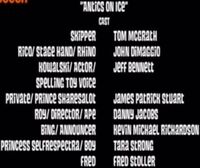 Skipper chooses to reward Private for his valiant effort on missions by taking him and his fellow Lunacorn fans Bing and Roy to see Lunacorns on Ice.

After a painful afternoon of missions, the other penguins agree to take Private to see Lunacorns on Ice to cheer him up. Skipper also agrees to let Private bring his fellow Lunacorn fans along, agreeing before learning that the fellow fans are Roy and Bing. With the difficulty of getting the large mammals to the show, Kowalski recommends scrubbing the mission, but Skipper is determined to keep his promise for fear that disappointing Private would lead him to evolve into a hipster. After the six manage to get to the arena, Roy and Bing are seen outside by a stagehand who believes they are part of the show and pushes them inside before the penguins enter themselves. On ice, Roy and Bing unintentionally get in the way of the Lunacorn actors while interacting with their heroes, which entertains the audience but irritates the director until Skipper and Rico are able to contain the chaos. Roy and Bing are later added to The Lunacorns TV show, which disappoints Private because a penguin character was not added. Private was just about to put on hipster glasses, but Skipper took them out of his flippers saying that penguins would be too awesome for The Lunacorns.

1.Don't Stop 'Til You Get Enough (Original 1978 Demo) (Performed By Skipper Private Kowalski And Rico)