Madagascar Wiki
Register
Don't have an account?
Sign In
Advertisement
in: Episodes, Episodes focusing on Private, Episode focusing on Marlene,
and 2 more
English 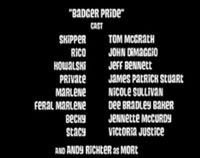 Badgers arrive at the zoo and Private and Marlene makes friends with them until they threaten to rip Marlene limb-from-limb.

One morning, Marlene prepares for her dive, but notices a bush. Marlene recognized Private's voice and Private said that he's in camouflage training. When Marlene comments about Private's skills, Private pops up, but he and Marlene were shot by a tennis ball launcher by Skipper, Kowalski and Rico. They got shot to the bounce house in the Lemur Habitat and got bounced to a tree outside the park. The rest decided to look for them. As they got out, Private falls in and Kowalski asks where Marlene is. Marlene (just like from Otter Gone Wild) turned wild and attacks Rico. They lead Marlene and Rico back to the Zoo with Marlene turning back to normal and asks Private if she went off feral again (meaning she knows about being wild when she's outside now). Private answered a little. Marlene knows that the rest of the Penguins are the ones who launched the tennis ball launcher and Private panics when he saw a sign pointing to the Badger Habitat. Private requests permission to hide in his bunk forever, but Skipper denies it and tells him it's time to face his fear. Marlene scoops Private to the Badger Habitat and throws him in. The badgers, Becky and Stacy appear from the cave and greet them. After sharing peanut butter winkies, frying marshmallows and fish (which only Private is frying), playing hide-and-seek and taking pictures in the photo booth, the Badgers lend a scrapbook to the two as they leave.

At night, Private leaves for the others and finally overcome his fear of badgers while Marlene goes back to her habitat. When she comes in, the Badgers come in there to play games with her like drinking smoothies, dancing around and hang gliding. As they crash land, Marlene convinces the twins to stop, but they start cheering for their scavenger hunt tomorrow. When Marlene loses her temper, she told them to stop "badgering" her, which made Becky rage at her. When Marlene said she didn't want to play any of their "silly" games which made Becky angrier and Stacy begin to get angry.

While Rico vomits four bombs (but one bomb blew up inside him and when he vomits the last one, it was half) and Private talks about Becky and Stacy's relationship resembling to his relationship with Rico, Marlene barges in and panics at the badger's attempt to rip her into shreds and this returns Private's fear of badgers. The penguins place a hidden camera, a laser base and a trip wire on Marlene's habitat. Private gives Marlene a clove of garlic saying it warns off "evil badger spirits". However, the Badgers were revealed to be there before the Penguins set the traps. Marlene throws the garlic at them and runs away until they got up and ran after her. Marlene accidentally set off the trip wire alarm that wakes up the Penguins and come up for her. Private says he's got an idea (which Skipper thinks is just an excuse to not be devoured by the Badgers).

The Penguins try to block the Badgers, but they ran over them. Skipper asks Kowalski and Rico to do a little operation. Kowalski gets a gum ball machine, uses a paper clip to open it, Rico eats it and Kowalski uses Rico like a gum blaster to blast at the Badgers, but they evade every single stick of gum. Skipper and Kowalski try running over Becky, but she jumps and they hit each other. Rico chases Stacy, but Stacy crawls in a pipe which Rico's head is stuck in. The Badgers surround Marlene on the Central Park Zoo wall dividing the zoo and the park. Private used the bush earlier and shoots the tennis ball launcher at them, knocking them off. When Private checks the tube, one tennis ball hits him and it bounces at Marlene, knocking her off. Marlene realizing she's outside becomes scared knowing she will become feral again, Becky then sarcastically says "Wow nothing gets by you does it?" Overwhelmed again by the outside, Marlene turns wild and beats up the badgers while the penguins cheerfully watch on the ledge.

The next day, the Penguins have a picnic. Becky and Stacy decided to forgive and forget yesterday's mishap, mainly because Feral Marlene is still holding them.