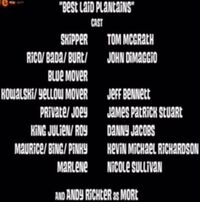 Julien and Marlene have eaten all of Bada and Bing's African plantains, and must flee the zoo forever before Bada and Bing notice.

Is in the hour of the out, and Alice out the zoo. The penguins enter the closed restaurant in search of fish, but they only find cheese-z-fish. Kowalski finds a stirrer and plans to use it for an invention, when Private finds bananas. Skipper decides to get the gorillas the bananas so they would be in their debt, but Bada and Bing have no interest in them because they have African Plantains. King Julien wants some and decides to steal them, but only Mort agrees. ("Bad idea" "Horrible idea" "Even you can't be that stupid!" [quotes from the animals who disagree.]) At night, Julien sneaks into the habitat and begins to eat the plantains. Marlene is observing the sky with her telescope when she sees Julien eating. Though she protests, Julien persuades her to eat some.

The next day, Julien and Marlene have eaten all the bananas and are forced to flee the zoo forever. Meanwhile, Kowalski presents his new invention, the Tunneller. However, when Kowalski activates it, it explodes. Elsewhere, the gorillas are going crazy, smashing popcorn carts and throwing other animals into people's cars. The penguins stop them, and immediately figure that the theft is Julien's deed. Private calms them down with what the Lunacorn show had said to him, until Skipper receives a call from Marlene. Julien and Marlene had taken off with the Penguin Car, and the plane is unusable, thus the penguins pursuit the rampaging gorillas on helicopter seats. Marlene and Julien accidentally crash the car into a crate full of plantains and give them to Bada and Bing, saving their own lives. Unfortunately, Rico is angry that the car's paint has been chipped.