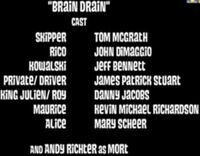 Kowalski's plan to increase his brain power backfires, and he begins messing up the penguins' mission to get more fish.

Kowalski is unsatisfied with his current intellect, blaming his many failed inventions on not being smart enough. He attempts to super-charge his brain, but the extra intelligence soon fades away along with his normal intelligence, and his plan backfires - Kowalski isn't just as intelligent as he was before - he's even dumber than mud.

Meanwhile, Alice has received an automatic feeding machine that fires the animals' food directly to them instead of her having to do the job. While on the whole it works for most of the animals, it only sends the penguins one single fish between them, which Rico quickly eats himself. Skipper decides this must be rectified.

Unfortunately Kowalski's lack of intellect starts to compromise the troop's missions (which consist of getting fish). Skipper, Private and Rico must find a cure for their buddy before he hurts them or himself. At first Skipper asks Private for options, which consist of going to the now inanely stupid Kowalski, so he tries out Rico for options, which consist of hitting Kowalski over the head with a croquet mallet, so he has to settle for Private's plan. Kowalski, of course, can't come up with any options, so Skipper has Rico paint a red circle in their habitat while they go off to fix their fish problem themselves.

The Penguins go to 'The Automatic Feeder', while Kowalski follows the "line". Unfortunately he loses the line and causes havoc around the zoo, also changing the Automatic Feeder from Skipper's setting of 100 fish to 100,000 fish before returning to the red circle. He is then buried under 100,000 fish. He eats the fish which made him smart again. After he eats it, he tells the others that fish is a brain food.