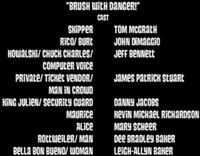 Kowalski's blueprints for an invention which could destroy civilization end up on display in a museum.

When a couple passes by after seeing the penguins, the man thinks the penguins are a bit odd. Skipper thinks he knows too much and orders Rico to shoot a stun arrow at him, but then the man realizes he was probably seeing something wrong. Skipper tells Rico to put the arrow away, but Rico accidentally shoots Alice in the booty, stunning her. She seemed to be painting the fence, and Burt, who was nearby, took the paintbrush. Burt discovers a love for painting and he's remarkably talented. First Burt draws himself.

Back at the Penguin Habitat, Kowalski finished inventing a quantum accelerator that could save the world, but has a 50% chance to destroy it if fallen in the wrong hands. However, Skipper orders Rico to destroy it, and Rico stomps on it continuously and throws it in the oven. All that was left of it was dust- and the Blueprint. But Kowalski says he hasn't built it yet, the thing Rico destroyed was his new calculator and now he has to use his abacus again. After careful thought, Kowalski decides to destroy the blueprint, but unfortunately it flies away when a news helicopter flies towards Burt's Habitat. Burt draws four more paintings when art critic Bella Bon Bueno, who learned about the zoo's painting pachyderm, had come as she must see Burt's work for herself. She turns down Burt's first 2 drawings, but when Kowalski's blueprint sticks to the last one, she loves it and puts it in an art museum. Knowing this, King Julien gives Burt an "opportunity" to draw him. Burt mistook this as drawing on him, and paints him red, but Julien gets angry and says to do it on paper. When he says that, Burt takes him and splats him onto a sheet of paper. Maurice tells Burt that King Julien's portrait would make good gifts, and Burt continuously splats Julien onto the paper (Maurice's one was blue).

The penguins discuss about this & decide to go to the museum in disguise, after hearing Kowalski talk about what could happen if an evil genius with a van dyke came to the museum, only to be caught by a night guard. Skipper asks Kowalski if he has any better plans than just using their man in a hat disguise. Then they try to use the air vent, but the night guard turns it on. Skipper makes his own plan: the Trojan Horse disguise. Kowalski asks Skipper how he knows this is going to work, and Skipper says it's because it's his plan.

This plan comes successful, and the penguins find the blueprint. Private suggests that they just get there, but Skipper tells Rico to regurgitate an invisibility detecting bomb. There are thousands of lasers! Rico then regurgitates a disco ball and a radio, in which they tune in and ride the disco ball there. Skipper says they might as well rip it off, but Kowalski says the people will notice. Rico regurgitates a pencil and uses the eraser to delete the main base of the blueprint and replace it with a unicorn.

The next day, as Bella announces the art, she notices something is wrong. As soon as she notices the unicorn, she gets mad and rips the paper.

The episode ends with Burt going to the Art Museum to post his circle X painting, but ends up being caught by the night guard.