Madagascar Wiki
Register
Don't have an account?
Sign In
Advertisement
in: Episodes, Episodes focusing on X, The Penguins of Madagascar Episodes 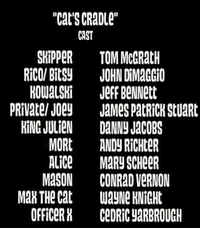 The penguins think they can take him on. Skipper tells Rico to attack, who is struck by an energy stick. Skipper, Private and Kowalski try to attack him but Officer X throws tape at Skipper and Private and electrifies Kowalski. Kowalski goes crazy for a short period of time, saying "My mother's homemade cookies are the best!".They strategically retreat and attempt to hide Max in King Julien's Royal Bouncy. However, Julien decides it's time for a midnight bounce rendering the inside of the bouncy inhospitable.

The penguins mark Max's scent on a tree in Joey the kangaroo's habitat hoping that Joey will be too much for Officer X to handle. This fails as Officer X takes down Joey in one move.

The Red Rhodesian Slasher has a very violent courtship ritual and Max begs the penguins to get him out. The penguins use Mort disguised as a rabid chihuahua to distract Officer X while they bust Max out.

This allows Max to make a break for it, but the disguise wears off. X grabs what he thinks is Max, but it's actually the Slasher in disguise, which attacks him. Since the park is still full of traps, the Penguins send Mort out to set them all off, and Max is finally free to escape, while X takes a beating.