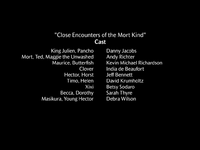 When Mort is abducted by "aliens", King Julien teams with Clover, Maurice and Hector to investigate why he's not the one being abducted.

In Mort's stump, Mort is praying to the gods before he goes to sleep. While sleeping, he is suddenly woken by a bright light. Mort then gets abducted by the bright light.

In the throne room, Mort explains to the group how he got "abducted" by "aliens", but Clover and Masikura do not believe that aliens are real. King Julien questions why Mort got abducted instead of him, and Maurice says there must be a logical explanation, like a bad dream, or Mort sleepwalked. For proof, Mort shows them his butt, which has a bar code on it. Clover thinks he just shaved his butt again. To solve the issue, Julien orders Masikura to tongue Mort for answers. While Masikura tongues Mort, Julien grabs her tongue so he can see too. Julien sees humans in hazmat suits doing experiments on Mort. Julien is excited to meet the aliens so he can improve his technology music and make a friend. Julien, Maurice, and Clover decide to stake out Mort's stump that night.

During the night, Julien and the others hide around the stump while Mort stays in his bed. Suddenly, the bright light returns and Mort is taken. Maurice screams. After making sure no one is hurt, Clover asks Maurice for a situation report, only getting whimpers and squeaks in response.

Back on the plane, Maurice tries to convince Julien to open up to the public about the alien invasion. Julien tells him he must keep this private. He then begins to form another plan, before being interrupted by Mort, who now has a tracking device on his ear. Timo says he may be able to patch into this device, while Julien is purely jealous.

With Maurice, he goes to Xixi, wanting to tell the lemurs about the impending alien invasion. Xixi wanting a good news story, allows Maurice to hide his identity. On Xixi's show, Maurice hides behind a curtain, with a distorted voice, and tells the other lemurs to remain calm, but hide in a bunker and stockpile food. If they do this, they will be safe. After the show, Maurice bumps into Hector, who questions him about the aliens. Hector tells Maurice that when he was young, his mother was taken by the aliens. If they are back, he can finally get some answers. Maurice asks Hector to help him hide the lemurs, but Hector says you can't hide or run from them, as they will find you. Hearing this makes Maurice more terrified.

Back in Mort's stump, Clover, Julien, and Timo try another stake out with Julien sleeping in Mort's bed, waiting for the aliens. Meanwhile, Mort is in Julien's hut hiding, but is taken by the aliens again.

In Timo's house, Julien is upset that the aliens took Mort again, but Timo, with Mort's tracker signal, is able to locate Mort. Timo suggest a plan to extract Mort from the aliens. Julien assigns his team members roles, and Masikura asks where Maurice is.

At the bunker, Xixi reports along with Maurice, with a paper bag on his head, while lemurs are storing mangos in the bunker. Maurice claims that the aliens built the baobab tree. Xixi then interviews multiple lemurs on the situation, including Becca, Ted, and Dorothy.

In Julien's hut, The group are just about ready to go out and find Mort, when Hector comes inside with a harpoon and joins the search party so he can get some answers and revenge.

Maurice runs to the throne room to inform Julien that the bunker is ready, but with Julien, Clover, and Mort not there, he assumes the worst, that they were taken too. Maurice then orders the lemurs to go into the bunker for their own safety, but there are too many mangoes to get inside. Maurice tells everyone to eat their way inside for safety.

During the search party, the group runs into a metal trailer and Timo confirms that Mort is in there. Clover starts to go over the plan, but Hector charges in and fires his harpoon gun which bounces across the walls and hits Mort in the backside. Mort is released and after Clover confirms there is no one in there, Julien decides to mess around and press all the buttons. This draws Timo's and Clover's attention, as both try to stop him. While Hector is watching, Hector's mother comes out of one of the cages and talks to him. The two hug and Hector asks Helen where she was all his life. Helen explains to Hector the place is a laboratory for human scientists and that she did try to escape at first, but grew to like it there, and decided she could do good there. Hector gets angry with her, since she had a kid and abandoned him. Helen apologizes and asks if they can start over, but Hector says that was a horrible apology. The door opens and three humans appear. Timo, Helen, Masikura, Clover, Mort, and Hector run away. Julien tries to communicate with the humans but they can't understand Julien. Julien then gets bored and grabs the harpoon gun from Clover and tells the humans to stop abducting Mort, and to get better space technology.

Clover, Mort, and Julien exit the trailer as Julien tells Hector to wrap it up with his mother. Helen says that she's ready to come back to the village and be Hector's mother again. Hector is glad but questions where she will live. Helen assumes that she'll live with him, but Hector says he's not looking for a roommate. Hector offers another idea, since he knows where she lives now, he could visit. Hector promises to visit Helen all the time and gives her a tracking chip. Hector then leaves, after Helen says goodbye to him.

The group returns to village, but questions where all lemurs have gone to when they see it empty. Timo thinks it could be a mass extinction event, while Masikura says they were raptured up to the sky gods' palace in Frank-ri-La. Clover finds a half eaten mango on the ground and figures out where the lemurs are. Clover opens the vault, and lemurs and mangos come shooting out. Maurice sees Julien alive and claims that they survived the alien invasion.

In the bunker, now converted into a club, Julien and Maurice are dancing. Maurice apologizes to Julien about telling the lemurs about the invasion. Julien says it is fine, since if he didn't do that, they wouldn't have this exclusive club. Julien shows Maurice the line outside. Xixi is trying desperately to get in the club but gets knocked out by Butterfish. Maurice questions Julien about Butterfish's background check, but Julien replies that it's Maurice's club.