Queen Clover is a character in All Hail King Julien. She is the queen of the Mountain Lemur Kingdom, wife of Sage, former captain of the Ringtail Guard and former bodyguard of King Julien XIII. She was also part of King Julien's royal circle, along with Maurice and Mort. She's always eager to put her skills to the test; sometimes a bit too eager.

As a child, Clover wasn't the favorite of her parents. But she was the favorite granddaughter of her grandmother, Rose. Rose let Clover come to fights and tournaments with her even when her parents forbade it. Clover loved her very much, and even made a tape for her of herself singing a song about being a warrior. fired her up for the back alley brawl. Eventually, Rose died and in a fight with Vigman Wildebeest while Clover watched, traumatizing her significantly.

She was promoted to Captain of the Ringtail Guard by King Julien after he saw her bravery when she tried to protect him and the kingdom, and when she volunteered to follow him to the Foosa Territory when he was going to save his people.

Clover is a highly trained professional bodyguard. At first, she is entirely focused on her job, but she slowly starts to become more inclined to have fun throughout her newer king's reign. She is always battle-ready when King Julien or one of her fellow lemurs is in danger from an outside force such as the fossa. 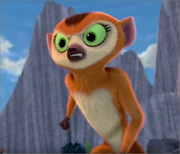 Despite her goal in protection, however, she herself can occasionally be the source of danger due to her excessive paranoia. Since she is always alert and on guard she may accidentally (or wrongfully) attack someone. For example: during a couples dance, she punched someone for asking her for a dance. Her reasoning: "Step inside the circle of comfort, you get the paw.” On New Years, she punched a lemur who cheered “Happy New Year”, believing he had a knife. She also attacked Pancho at his wedding, believing the knife in his hand was to injure King Julien, who was standing next to her. In reality, all he was going to do was cut his wedding cake. She is also not the best at comforting certain people, like when she pointed out to Dorothy that her hut was burning down, only to then punch her out of embarrassment. But, in Return of the Uncle King, she accepts having fun over fear, thanks to King Julien and Mort. Overall, she can sometimes be hot-tempered, impatient, intimidating and paranoid, particularly during Julien XIII's early reign.

However, she does have a soft side, and can be caring, affectionate, sweet, kind, and thoughtful when she wants to be. During the battle against King Koto, Clover learns to be patient and compassionate when she and Sage train with Jarsh-Jarsh. When Sage tries to kill Koto, Clover reveals this soft side, convincing Sage to spare Koto, since Koto actually wants to die anyway now his empire has fallen.

Clover claims to have gotten her skills by graduating at the top of her class at a military academy. Her vigorous training obviously includes skills such as hand-to-hand combat, as she is able to knock out a fossa with just one punch. She has trained for various situations of lockdowns in case of a riot against the king. She is a very skilled investigator and also a very skilled interrogator. Clover is very tenacious, as shown in one of her investigations where she worked for two days without sleep. She has also mastered the art of dental combat and explains that she knows how to kill forty-five different ways with just her teeth.

Another skill of hers is that she knows how to set up military checkpoints. Clover is also very capable of training others with certain skills she knows, as she was able to train Mort so that he could aid her in interrogating anyone who wanted to speak the king. Another very useful skill of hers is that she knows the right way to address people in certain situations. For example, when Clover asked Mort to follow King Julien around to make sure that he was safe, she made sure that she used a softer voice so that she did not spook him. She also has great hearing skills as she was able to hear Uncle King Julien when he tried to quietly raise his club to knock her out. Clover is able to knock out Uncle King Julien with a punch without even looking behind her. She is able to make good use of her resources, being able to fashion a rope out of some vines quickly to tie up Uncle King Julien. She also has a lot of knowledge of the materials present in the kingdom. When Clover examines the rope that was used to tie King Julien to a balloon she quickly is able to deduce that it is outlandish in a matter of seconds.

Her relation to the current king seems to be completely mirrored to her relationship with the previous king. Despite Clover initially not adjusting to his reign (until she saw the value in having fun over fear through Mort), the younger King Julien XIII allowed Clover to influence him in positive ways and was usually open to her suggestions. The previous king wouldn't have tolerated her ideas. King Julien was also able to quickly recognize her bravery in the first episode and immediately promoted her to the Commander of the Ringtail Guard as a result, much to her joy. There have also been jokes that she may have had romantic feelings for the younger king, such as when she asked to see Julien's bottom to be sure it was really him.

Julien replied with "Oh Clover... we don't have time for-", showing that he believed she was flirting. She mostly has a protective relationship over him, such when she wrapped her arm around him while fighting scorpions in "Get Off My Lawn". Another example of this was when her sister, Crimson, nearly married King Julien in "Crimson and Clover". She became very angry with her sister for endangering in the king. This continued to the point where she searched her sister's residence for any evidence she might hurt the king. She even refused to attend the wedding. She did, however, later apologize to King Julien for getting in the way of his wedding.

Clover and Crimson have a sort of sister rivalry going on, which only increases when Crimson first comes on the show and becomes engaged to King Julien. Clover considers Crimson careless and selfish, and she also claims that "she leaves a trail of destruction everywhere she goes." Though it's unknown excactly when their rivalry started, it started somewhere during childhood when their parents favoured Crimson over Clover. However in the last episode, The End is Here, they solve their problems and Clover asks Crimson to walk her down the aisle.

Clover and Sage were absolute polar opposites. While Clover was hot-blooded, paranoid, frequently stressed and aggressive, Sage was calm, patient, cool-blooded and wise. When Clover first met Sage, she immediately idealized him as the perfect male of her dreams and fell in love with him. He closely resembled Norj, her novel character (representative of herself), Thysander’s, love interest. However, Clover grew annoyed by his calmness and lack of dominance, to the point where she yelled at him. She said her expectations from him are bravery, heroism, attentivenes, romance, and virility. However, they did appear to regard each other as friends and meet up with each other when needed. With the help of Jarsh-Jarsh, they finally came to understand and accept each other's way of behaving. Clover learned the power of patience and peace while Sage learned to be himself and fight against what is wrong. After Koto's death, Clover and Sage got together, even kissing on the first night of the victory party. A little while later, they appeared swinging happily hand in hand through the trees in the moonlight. 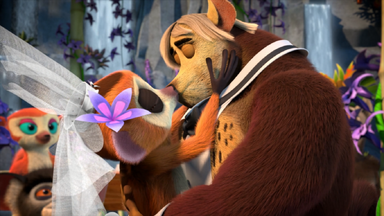 Her love for Sage deepens during the last season of the show. In Julien 2.0, Maurice asks Clover whether she and Sage are house hunting. She starts to say "yes", honestly, but realizes and stops herself, saying "no". Mort adds, "Clover has a boyfrien-", but cannot complete his sentence because he is grabbed by Clover. She even hits the Mountain Lemur Captain, when he asks Clover and Sage if they are looking for a home together. Throughout the first part of the final season, Clover tries to hide her love for Sage, but accidentally reveals it in several ways. Finally, in The End is Near, Clover thinks that Sage has called her to his kingdom to propose to her. To her horror, he calls her over to say that he will marry Crimson. Heartbroken and angry, she tries several times to impress him, hoping to change his mind. When this fails, she leaves. However, just when she arrives back in the kingdom, Sage arrives by hawk in front of her, and proposes. They are married in The End is Here.

Mort and Clover have a pretty good relationship, and it is stated by Mort that they are good friends in The Neverending Clover. Despite Mort sometimes being scared of her, he still is very fond of her and looks up to her. Once, when she asked him for information, he helped Clover catch the culprits, who were illicitly selling copies of King Julien's line of diapers, Ted and Dorothy.

Ted is Clover's assistant captain of the Ringtail guard, once replacing her as King Julien's bodyguard when Clover was forced to take a vacation. Ted, however, repeatedly proves to be a bad bodyguard, being very poor at fighting and confrontation. In All Hail King Julien: Exiled, Ted becomes braver and better at fighting. He manages to impress Clover when he saves her from some Mountain Lemurs. Ted still does look up to Clover as a superior and often seeks to impress her.

Clover looked up to her grandmother; she was her idol, and was apparently also her occasional babysitter.