Tangled in the Web 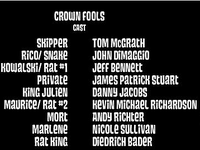 Skipper accidentally drops King Julien's crown into the sewer. While the penguins go down to retrieve it, Marlene tries to calm Julien down by making him a new crown.

The "zoo overlords" have declared Mondays "Fun Day"s. Marlene shows up at the penguin habitat while they are dispatching nine ninja warriors (bowling pins with faces drawn on them). Marlene doesn't believe that Skipper possesses the ability to have or be fun.

To prove how much fun he can be Skipper does a corkscrew dive into King Julien's Royal Bouncy and pokes a hole in it. The air form the hole blows Julien's crown off his head and into the sewer. King Julien begins screaming all day through the night because of the loss of his crown. After a furious Maurice scolds Skipper for accidentally making Julien lose the crown, Marlene devises a plan to calm down Julien by making him various new crowns while the penguins rescue the original one from the sewer.

The penguins get trapped by a giant Rat King, wearing Julien's crown and Skipper has to wrestle with him to get the crown back. Skipper begins by getting demolished but then he uses the corkscrew move that got him into this mess in order to defeat the Rat King and get the crown back. When they bring it back, King Julien notices a smudge on it and orders Maurice to bring him the spare crown he has. Angry from all that work wasted, Marlene gets a crowbar from Rico and chases a frightened Julien down. (it is unknown what happens to Julien)