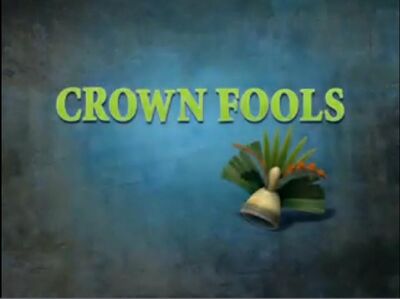 Scene I: Top of the Penguin HQ

The penguins are seen standing in a line, surrounded by ninja-bowling pins.

After Rico takes out the last one, with his tongue, Skipper congratulates him and they hi-five.

Marlene walks up behind Skipper.’’

Marlene trips over a bowling pin and falls down.’’

Skipper: (Patronizingly) Might want to watch out for the ninjas, Marlene.
Marlene: (Annoyed) You mean bowling pins.
Skipper: I mean ninjas. Don’t you see the little faces on them?
Rico: (Nodding) Uh-huh!
Marlene: Why are you guys working anyway? Come on, it’s Funday!
Skipper: Funday? Rico, code blue! Private weapons check, Kowalski options for… hold on wait, whoa whoa whoa, what is this “Funday”?

Kowalski: Few humans visit on Mondays, thus our zoo overlords renamed Monday, Funday.
Skipper: Why wasn’t this in my morning briefing? How am I supposed to know this stuff, come on people, I’m not a mind reader!

A big banner stating, “FUN DAY!” is seen behind Skipper.’’

Marlene: You Skipper, are just… not Funday material.

She goes to walk away but Skipper cuts her off.’’

Skipper: Whoa, hit the brakes sister.
Marlene: (Confused) WHAT?!?
Skipper: I’ve taken down an angry walrus with a wing and a prayer, and another wing. I can handle anything.
Marlene: Uh-huh. Except fun.
Skipper: Especially fun. Right boys?
Kowalski, Private, and Rico: Big fun. Uh, yes Skipper. Sure.
Skipper: Hey, I’m as fun as the next guy.
Marlene: Not if the next guy (points out King Julien to Skipper) is that guy.

King Julien is seen jumping on the Royal Bouncy.’’

King Julien: Hello, silly penguin, what are you doing on my bouncy?
Skipper: Because it’s Funday! And certain sea mammals think I’m no fun. Well hey Marlene, check out this fun move. I call it, the “corkscrew”.

Skipper jumps up very high and comes spinning down. His beak gets stuck in the bouncy and when he frees himself it begins to deflate, sending King Julien’s crown into the street.

A passing truck comes by, then knocks it into the sewer.
King Julien: (Shocked) My crown… my crown… oh… (starts to scream) AAAAAAAAAAAAAAAAAAHHHHHHHHHHH!! (Julien's screaming makes a transition to the night time.)

Maurice, looking grumpy, is seen entering the penguins’ HQ. All of the penguins and Marlene are sound canceling headphones. Private holds them down. Kowalski types on his Spell and Speak. Rico is covering his doll’s ears. Skipper and Marlene are seen playing Chess. King Julien can be heard yelling in the background.

Maurice: (Angrily) You! You did this!
Skipper: (Removing his headphones) What?
Maurice: (Menacingly whispers) You... Did... This.
Skipper: I know, I know. I take full responsibility.

Skipper: Well, ninety percent.
Marlene: Whoa, whoa. I... I said have fun, I did not say go nuts.
Skipper: Right. I should not have corkscrewed; shame on me.

Maurice storms out of the penguins' HQ.

After Maurice angrily slams the door on his way out, Marlene and the penguins huddle up and discuss their course of action.

Marlene: Alright, I’ll try to calm down the screamer, while you guys go get his crown. Sound like a plan?
Skipper: (Proudly) That does sound like a plan, Marlene. Gentlemen, commence operation, "give the furry crybaby his bottle".

King Julien is seen with a piece of tape over his mouth.’’

Mort: He did stop the screaming.
King Julien: (Ripping the tape off) Wha-owe, I will get you for… OWE! Owe owe owe! (Angrily) How am I supposed to be kingly without a crown? It is the proof of my kingliness.
Marlene: And that is why I’m going to make you, ready? Wait for it… A NEW CROWN!
King Julien: (Sadly) But the old crown and I have been through so much together.
Marlene: Yes, yes but it wasn’t as amazingly cool as… (turns around and begins constructing a crown out of balloons) THIS!

King Julien puts his new crown on and looks at himself in a mirror.’’

Marlene: Huh? Huh?
King Julien: It is puffy and complicated…
Mort: Like meeeee?

King Julien begins to float away.

Maurice jumps and tries to grab King Julien, but misses and lands on Mort, crushing him. Marlene jumps up and holds onto Julien.

Marlene: I got ya! (balloon pops and Julien flies around) Or not...

King Julien: I want my old crown!
Marlene: (To a walky-talky) Uh hey Skipper. Turns out the new crown didn’t fly.
King Julien: Oh it did fly, too much.

The penguins are seen descending into the sewer on a rope. Skipper is talking into a walky-talky.

Skipper: Not to worry Marlene, we’re on the trail.

The penguins slide down a tunnel when Skipper asks Rico for a flashlight.

Rico regurgitates a flashlight with a little spit on it and hands it to Private.

Private gingerly grabs the flashlight from Rico, carefully avoiding the spit on it.

The flash light reveals a blocked off section of the sewer, with a sign reading, “DANGER AHEAD” on it.

Skipper: (Slowly) I don’t like the looks of this.
Kowalski: Keen instinct tells me there’s danger ahead.
Skipper: It’s got my name written all over it. You three wait here.

Private: (Timidly) I think I’d prefer to tag along, if it’s all the same, Skipper.
Skipper: Denied, Private. I corkscrewed us into this… I go solo.

Skipper slides past the barrier and the others follow and cut him off.

They put their flippers over each other in the center and raise them. They begin walking forward when a cage is lowered onto them.

Kowalski: And by this, I mean a steel cage trap.

King Julien is seen crouched in the habitat’s bar’s counter, his hands on his head. '
'
King Julien: (Sadly) My head is naked. My head is nude! My head is crownless, dark is my mood!
Marlene: (Nervously) Crazy poetry… good stuff.
King Julien: (Angrily) I want my crown!
Marlene: And. I. have. your. crown. A crown you’ll love as much as you love yourself, because… (places a King Julien plastic cup on King Julien’s head) it’s you! (Imitating King Julien’s accent) I’m thinking there’s an awesome amount of fabulousness going on here. (She hands him a mirror) Huh? Huh?
King Julien: It is hot with handsomeness.
Marlene: (Nodding) Annnnd heeere’s the best part.

King Julien: Mmm. My need for beauty and my need for fizzy drink, both are satisfied.

King Julien takes a very long sip, causing the cup to be crushed and deformed completely.

King Julien: (Noticing the condition of his new crown) Ahhh! My little head!

King Julien throws the crown aside and it lands on Maurice’s head.

The penguins are seen striking their kung-fu poses, surrounded by pairs of yellow rat eyes in the darkness. Six rats come out of the darkness and walk towards them.

Kowalski: Oh boy, sewer rats!
Private: (Reaching forward to pat one on the head) They’re actually quite cute.
Rico: (Giggling) Hehehe.
Skipper: Attentione, little rodentia. Has anyone seen a leafy crown?
Rats (variously): Maybe. What’s it to ya?
Skipper: We need it, pronto.
Rats (variously): It belongs to our king. And there’s only one way to take it from him.
Private: Smile and say "Please?"?
Rats (variously): Uh-no. Paw to paw combat! (chanting) Beat the king; get the crown!
Skipper: (Chuckling) Okay. I’ll go easy on him. Where is the little guy?

A giant mutated rat lands in front of the penguins, wearing Julien's crown.

Rat King: Rawwr!
Private: Oh, you are toast.
Skipper: (Angrily)What was that, Private?
Private: Uh, I mean, crusty on the outside, soft and warm on the inside, and good in a jam.
Skipper: Oh, that’s nice.
Rat King: You are going down, clown! Down to Rat Town!
Private: Aren’t we already there?

King Julien is seen looking at himself in a mirror. He has a snake on his head.

King Julien: Now, this might be working for me. Yehehehes. Smart. Hahaha.
The Snake: Do you really think you can pull it off?

King Julien, noticing his new crown is a snake, runs away.

King Julien: Snake!
Marlene: I don’t - I don’t… come on, that was a good… look. (Into her walky-talky) Tell me you’ve got the crown.
Kowalski: (Through the walky-talky) Oh, the crown’s been found. (Julien runs around one side)
Marlene: That’s great! Wait, where’s Skipper?
King Julien: (Still running around) Ahh!
Kowalski: Skipper is unable to take your call right now. He’s about to battle a mutated rodent.
Marlene: Oh. Huh?

Skipper: Kowalski, analysis.
Kowalski: (Drawing a picture of a rat before showing it to Skipper) This appears to be a former lab rat. Thus the extreme mutations.
Rat King: (Flexing) Hahaha!

The Rat King grabs Private’s flashlight and crushes it on his forehead.

Skipper: (Slightly scared) Well, incredible size and brute strength… (he ducks as the flashlight is thrown at his head) and magnificent aim aren’t… everything.

Skipper and the Rat King begin circling each other.

Skipper leaps at the rat king and karate chops him in the face.
Skipper: Hiyah!
Rat King: (After a brief tussle) That the best you got? Bird, that is some weak sauce. (Skipper kicks him) Oh yeah! Ya missed me that time.

The Rat King begins slamming Skipper on the ground with his tail.

Skipper bounces off of the cage and is ground into the ground by the Rat King. Kowalski shudders.

The Rat King spins Skipper around, making Rico dizzy and fall over. Then he rolls Skipper like a bowling ball into the others, right into the side of the cage.

Rat King: How do you like me now, FLIGHTLESS BIRD?!

The Rat King kisses his biceps.

Skipper is seen unable to keep his balance, talking to the cage.

Skipper: I knew you’d go going home to… (he is spun around by Rico just in time to see the Rat King body slam him) MOMMA!
Private: Poor Skipper, I can’t look.
Kowalski: This is the worst Funday ever.
Skipper: (Slowly) Funday… Of course!

Skipper launches himself off the side of the cage and corkscrews the Rat King.

Skipper slaps the Rat King and takes King Julien’s crown. The penguins stand triumphantly on the Rat King as the other rats shout angrily.

King Julien is seen sitting on his thrown, sad. Marlene has a pile of hats and suggests one to King Julien.

Marlene: (Rapidly) Look look look! You could be king of the cowboys, ride-em! Partn--?
King Julien: (Sadly) Shut up, ok? Can you not see that your king, which was me until, “the incident”, is brooding?
Marlene: Okay, okay. I failed. I failed! Everybody, I failed! There. I am an Otter-Failure. If I could just say a magic word, and make your crown appear, I would.

The penguins walk up behind Marlene. Skipper has a bandage over one eye.

Skipper: The magic word is (pulls out the crown) Funday!
King Julien: (Running forward to claim his crown) Ah-hah! My crown! (Kissing it, making Private and Rico creeped out) Oh how I have missed you, little head thing. Eh, it has a smudgy spot on it.
Private: Well you see, there were these sewer ra—(he is drope slapped by Rico)—oof!
King Julien: No, this simply will not do. (Clapping his hands together) Maurice! Bring me my spare crown!
Maurice: (Carrying a spare crown) Mhmm.
King Julien: Ahahah! (Putting on the new crown) Much betta!
Marlene: (At a loss for words) A-a-spare… crown? He just had one of those sitting around, just … ALL ALONG, A SPARE CROWN, ALL ALONG?!
Maurice: Well yeah, for emergencies. What kind of fool king would only have one crown? Please.

Angry with waste of time, Marlene holds up her hand and Rico regurgitates a crowbar into it. Marlene, looking angrily taps the crowbar on her other hand’s palm.

King Julien: What?! No! No! Neva on a Funday! Seriously… (he runs away with Marlene chasing him) Ahhh!

END OF EPISODE
RETURN TO
Community content is available under CC-BY-SA unless otherwise noted.