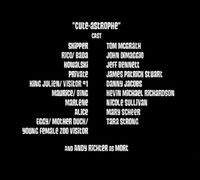 Private becomes upset at Skipper when he begins abusing a new found ability of Private - being able to knock people out using his cuteness.

Zoo visitors are becoming less impressed with the Penguins' repetitive "Cute and Cuddly" display, and there's less fish being thrown as a result.

Kowalski creates a machine called "The Adorablizer" to gauge cuteness, and tests it on Rico. When he demonstrates a distinct fail at any kind of cute, Skipper turns it on Private, who is incredibly cute just by nature. And when he really puts it on, he reaches a cuteness level of 132 percent, a level capable of knocking out the others.

At first Skipper thinks it should only be used for emergencies, but the crew begins using it for every little thing, until Private refuses to employ it after many trivial usages ordered by Skipper.

When the penguins are caught outside their habitat and caged, Private continues to resist using his cuteness as a weapon, even when the team is scheduled to be shipped to Copenhagen, Denmark, where Skipper fears returning. When Private tries to flee, the others chase after him, with all four moving their cages about like hamster balls, which zoo visitors find incredibly cute.

In response to the visitors' protests, Alice lets the penguins stay in New York, and Rico seems to have finally found a way to be cute, since he is still rolling around in the cage.