Madagascar Wiki
Register
Don't have an account?
Sign In
Advertisement
in: Characters, Females, Residents of Madagascar,
and 6 more
English

Poll Position
Enter the Fanaloka
Empty is the Head
Return of the Uncle King
The Really Really Big Lie
One More Cup
My Fair Foosa
Diapers Are the New Black
Crimson and Clover
Pineapple Of My Eye
Gimmie Gimmie Gimmie: The Game
Election
Daddy Julien
The Phantom of Club Moist
O Captain My Captain Pt. 2
Love Gauntlet
Close Encounters of the Mort Kind
The Butterfly War
Fast Food Lemur Nation
Get Off My Lawn
Run for the Border
The All Hail King Julien Show
Who Arted?
That Sinking Feeling
The Good Book
Julien 2.0
Spin Cycle
One More Cup, Part 2
There Will Be Juice
Blackboard Jungle
Lord of the Fruit Flies
Karl-Mageddon
King Julien is Watching You
The End is Here

"Sweetie, you're in the circle of trust here. You're safe as long as you don't break the circle."
~Dorothy to Clover, when Clover wants to be in her parenting class [source]

Dorothy is a character from All Hail King Julien.

Dorothy is a sweet, hospitable, emotional, slightly panicky lemur who appears to be pretty-level headed. She can be clueless at times. She will use terms of endearment such as "sweetie", and "hun". 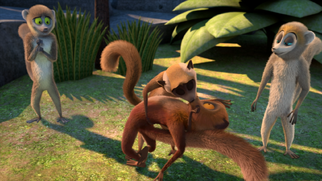 Ted: Ted was revealed to be Dorothy's husband in "Crimson and Clover". Dorothy is shown happily doing activities together with him and helping him in any way she can. She is blissfully ignorant of the fact that Ted isn't quite as contented in their marriage as she is, an example being when she mentioned he cried during their honeymoon in "Crimson and Clover". Ted, however, seems to be happy with her to a degree. He seems to care about her, as they are often seen happily spending time together, and he even panicked when he thought she was dead in "Pineapple Of My Eye". She and Ted have some obvious things in common, both of them being cutesy and awkward, using terms of endearment, and both of them having high voices. Though she loves Ted, she is sometimes embarrassed or annoyed by him at times, such as when he put himself on the sacrifice list, and times when he acts flamboyant. However, she loves her from him heart, as she even kisses him.

Clover: In the episode "Return of the Uncle King", Clover attempted to comfort Dorothy as she was crying, only to punch her out of the way when things got awkward. In "Diapers Are The New Black", Clover busted Dorothy and Ted for illegally making "imposter" diapers for the diaperless lemurs to wear.