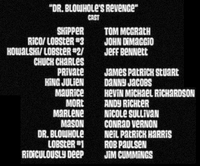 The Penguin Stays
In the Picture

When arch-nemesis, Dr Blowhole kidnaps King Julien and threatens to melt the Arctic Circle, the Penguins have to stop him, but they walk into a clever trap.

In the beginning, the penguins set off for another adventure to Dr. Blowhole. Surprised by his clever trap, the penguins fell and met their archenemy. Later on, Dr. Blowhole explained his monster creation: Chrome Claw to them and tried to shoot at them, but he was defeated when the penguins used candies: Swiss Delight and Nilla Cream. Dr. Blowhole, tired of the penguins foiling his plans to rule land and sea, has returned to annihilate them so he may take over the world once and for all.

A few years later, the penguins are in the zoo telling everyone their ripping adventure, but Marlene doesn't believe them. Julien appears wanting to be a spy, but Skipper thinks he wouldn't succeed and tells him, "You wouldn't last five minutes." Disappointed, Julien goes back his habitat and finds Mort tied up in kelp. Julien thinks it is a ploy to get Mort to touch his feet, but he is captured by lobsters. Back at the penguins' habitat, Private is sad that Marlene didn't believe that Dr. Blowhole is real, but Skipper says, "Better that she doesn't. Imagine if she blabbed, that mad doctor, discovering our secret zoo HQ". However, Dr. Blowhole is watching them and planning to lead the penguins to another trap. He contacts them. Dr. Blowhole explains that he has captured Julien which is the first step in his plan. Dr. Blowhole mistakenly thinks that Julien is Skipper's best friend. The penguins go to the lemur habitat to look for clues, and discover a fake/decoy Julien that explodes. They realize that Julien is on Coney Island, so they fly to rescue Julien. After a long journey to Coney Island, the penguins discover that Julien is now Dr. Blowhole's partner in crime, and they have waddled right into a shocking double-cross. At the zoo, Mort is freaking out about Julien's feet, so he goes to Coney Island. Back at Dr. Blowhole's hideout, the villainous dolphin mocks the penguins and explains his new plan of melting the arctic to flood the world using a series of towers with hoops of heat called "The Ring of fire". Skipper, Kowalski, Rico and Private must escape the trap and save the planet before Dr. Blowhole succeeds in flooding the Earth's surface in an effort to wipe out the humans (who forced him to perform tricks at Coney Island for their own amusement, which ended with Blowhole getting humiliated and as a result became evil). Suddenly Mort flies down and helps the penguins escape and annoys Julien and Blowhole. Dr. Blowhole order his army of Lobsters to attack the penguins, but he fails when Mort is pressing buttons randomly and rapidly activating traps which helped the penguins. Dr. Blowhole pushes Mort away, activating the Ring of Fire. Skipper tries to stop him, but Blowhole releases Chrome Claw to attack Skipper. The others try to defeat the lobsters, while Kowalski tries to shut down the Ring of Fire. At the North Pole, Chuck Charles is broadcasting about the Ring of Fire, while Dr. Blowhole is working. After Rico and Private save Skipper from Chrome Claw, Kowalski tries to stop the Ring of Fire but fails. Skipper is angry, so he and Blowhole attack each other while Julien announces he a good guy spy and helps the penguins by shutting down the Ring of Fire. Defeated and enraged, Dr. Blowhole gets into a dome-shaped escape pod. Before fleeing, Blowhole once again swears revenge on the penguins.

When the animals get home, Julien discusses his adventure to Marlene which she does not believe in his story. The penguins try to cheer up Julien. Julien asks if he can be their BFF (Best Friend Forever), Mort said, "King Julien is a buffalo, fire fighter", which ends the special.