Madagascar Wiki
Register
Don't have an account?
Sign In
Advertisement
in: Episodes, Episodes focusing on King Julien, The Penguins of Madagascar Episodes,
and 4 more 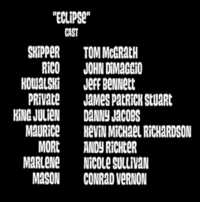 During a solar eclipse made by the 'Sky Spirits', Mason and Phil tell King Julien that he has angered them. In order to please them, Julien undergoes a serious attitude change, but this doesn't sit well with the other animals; even less with the penguins.

The chimpanzees are enjoying a relaxing Sunday morning when King Julien comes to their habitat and starts dancing and singing his "congaga". In a newspaper Phil reads that there will be a total eclipse of the Sun and the chimpanzees decide to use the eclipse to their advantage. They convince King Julien that the eclipse is a message from the "sky spirits", which shows that he made them very, very angry at him for his rude and selfish behavior as well as his all night dance parties. They force King Julien to change his ways by going to Private (the nicest guy in the zoo according to Julien) and demanding that Private teaches him how to be nice. Private suggests he could be nice by actually doing nice things for people.

Julien attempts to be nice by doing chores for everyone. He overdoes the kindness and annoys Skipper. Skipper tells Julien that he's been conned by the chimpanzees, but King Julien doesn't believe it so Skipper has Kowalski design up a weather machine to create another message for the sky spirits to send to Julien.

King Julien does not see the message because he is too busy crying. While King Julien misses the lightning bolt created by Kowalski's machine he does notice a rainbow forming as the storm clouds clear. Skipper convinces him that a rainbow is a message from the sky spirits saying that King Julien can go back to his own annoying kingly ways of congaga dancing and being a pain in the neck/butt.