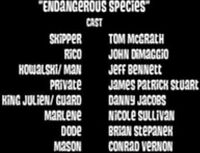 Kowalski attempts to bring a species of penguin back from extinction, but ends up cloning a dodo instead.

The penguins sneak into the New York museum to take a feather from the display of the Waitaha Penguin from the Hall of Avian Extinction. But just as they came close to achieving their objective, Rico accidentally inhales baby powder and sneezes up a grenade that destroys a security camera and creates a shower of feathers. With security coming, Skipper grabs a random feather and the penguins flee before being discovered.

Back at their HQ, the reason for their mission is explained. The plan is to clone an extinct bird to rub it in nature's face, due to many birds being rendered extinct. Kowalski adds the Clonotron's power source, the rare Higgs boson particle, which he amazingly found in Rico's belly and churns it up. But instead of the Waitaha Penguin, the feather produces a dodo.

The bird introduces himself as Dode, a self-proclaimed daredevil. He then impulsively handles Rico's flamethrower and gets himself killed much to the penguin's dismay. After re-cloning him, the penguins try finding him a place to stay in the zoo but Dode gets himself recklessly killed every time. Kowalski determines that having grown up with no natural predators, Dode lacks fear genes and is literally fearless (in the most stupid way possible). Skipper refuses to accept that and is determined to find a way to prevent Dode from going extinct. After re-cloning Dode, they try providing him with safety gear but he stubbornly refuses and runs off. While they chase him through the Central Park only to fail horribly, they are unaware that the cloning machine starts producing more Dodes.

Returning to the zoo, Skipper decides to put a halt to their cloning operation. Unfortunately, a whole flock of Dodes spill out of their HQ and start doing various dangerous stunts that end up killing them. Worse, the cloning machine explodes, launching the Higgs boson particle into space. Without that nor Rico being unable to regurgitate another, Kowalski can't reclone Dode. The penguins race around the zoo, trying to prevent the dodos from killing themselves but fail. As they bow their heads in mourning, Skipper spots Julien walking up their them carrying one last Dode, angry that the dodo got his head bald through use of explosives.

To Skipper's frustration, Dode is intent on getting himself killed and can't get it through his head that survival is worth living. Kowalski laments that Dode will likely end up with the other extinct birds at that museum, giving Skipper an idea. He tricks Dode into a staring contest with the original Dode.