Madagascar Wiki
Register
Don't have an account?
Sign In
Advertisement
in: Episodes focusing on King Julien, Episodes, All Hail King Julien,
and 2 more 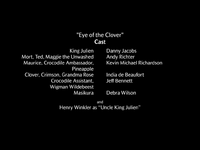 Run for the Border
Clover must choose between royal duty and family pride after she's invited to compete in the Tournament of the Doomed but Julien forbids her to go.

Julien, Maurice, and Mort are dancing in the plane, wanting Clover to join them. She refuses, saying she is on duty. Just as Julien asks her what could go wrong from dancing, a masked lemur bursts into the plane. Clover fights him, until he surrenders, giving her an invitation. Clover immediately knows what this is and stands there, in pure shock. She leaps up, ecstatic. Julien suddenly grabs it from her, teasing her that she has a boyfriend. He reads it out loud but realizes instead that it is an invitation to the Tournament of the Doomed. Mort too knows what this is, and tells the king it is a fight to the death. Julien asks Clover what first prize will be, and she tells him that she would win ultimate respect. Julien is displeased with this, and asks what second place would get. She tells him there is no second place. Upon realizing that any who do not win will die, Julien screams that Clover cannot go. She tells him she has trained for this her entire life, but Julien ignores her. He even goes as far as to make a law, forbidding Clover to go. She leaves, very angry.

In Clover's hut, she angrily throws around pieces of her furniture. She picks up a picture as she kicks another piece of furniture. She looks down at her paws, in them a picture of herself and her Grandma Rose. She says that her grandmother participated in every single tournament when she was alive. Angry that she cannot do what her grandmother did, she kicks a chair, which lands all the way on the ceiling. Sighing, she sits on a fallen stool, before the chair she sent to the ceiling comes down on her head, knocking her out. In her memory, a lemur that looks rather like her, her grandmother, tells her to stand up for herself, and thanks her for the mixtape she made her. A young Crimson is seen in the background, whining about what their grandmother is asking of them. A young Clover falls to the floor laughing. Rose tells her to get up, and she does. Awake now, Clover looks at her picture again, deciding that today, she will do something for herself.

At the plane, Julien attempts to continue dancing, but Maurice knows something is off. He asks Julien what it is that is bothering him. Julien collapses in his arms, telling Maurice he is worried his friend may get hurt in this tournament, and then tells him that this must be the first time he has ever denied Clover. Flashbacks of all of the many times he has said "no" to Clover appear. Maurice tells him that since this is important to Clover, they should let her go.

In Clover's hut, she packs her bags full of weapons, recalling her grandmother's words to stand up for herself. She eagerly leaves. Minutes later, Julien and the other two burst in, declaring they will let her go to the tournament. After realizing Clover has already left, Julien is outraged. He decides to go to this tournament and drag her back by force.

At the tournament, Clover excitedly claims a post. Ted announces the beginning of the tournament, and that if you hang your invitation, you are in the tournament. Clover eagerly slams the tournament in the post, only to find it is Julien's face. He tells her she has been "naughty" and instead of telling her his concerns about her competing and apologizing for "banning" her from going, blames Maurice for not letting her go. Clover says this is very important to her, and has been a lifelong dream of hers. Finally, Julien says she can participate. She happily hangs her invitation. Meanwhile, Mort has been beaten up by a large wildebeest for asking to use the bathroom. Angry, Clover demands to know who hurt her friend. When she sees the Wigman Wildebeest, she freezes, falling to the ground.

The group take Clover to a medical hut, where she sits throwing random mindless punches. Masikura is brought in to tongue her mind, to figure out why she froze. Masikura does so, and Julien joins by placing his own paws on her tongue. In Clover's mind, a flashback of her grandmother fighting the wildebeest is seen. A young Clover watches, her sister behind her, terrified. The wildebeest has her grandmother on the ground, nearly dead. The wildebeest prepares to kill her. Clover screams as her grandmother gives her one last look, before the wildebeest slams his sharp horns right into Rose's chest. Woken from the flashback, Julien exclaims to Maurice that the wildebeest killed Clover's grandmother. As she is now in no condition to fight, the two decide to pull her out of the tournament.

The crocodiles, in charge of the tournament along with a "mysterious snake", allow Clover to forfeit, but she must go into the forfeiters' pit. Julien and Maurice run away.

At the medical hut, Julien contemplates what to do, as Clover can only hit with one arm. Finally, he has an idea and asks Mort for some rope.

At the tournament, Julien is seen with his leg tied to Clover's. He claims that they are twins, conjoint. The crocodiles allow it, after approval from the strange snake behind the screen. [ Later, at the tournament, Julien and Clover prepare to fight a scorpion, after a threatening message from Wigman, the wildebeest. Julien pokes Clover with a stick to make her punch things, but her punches miss as they are only in one direction. Julien ends up being stung by the scorpion. They run away, but the scorpion follows. They duck, however, and the scorpion slams into a wall. The two win.

Back at the medical hut, Julien complains that Clover is too stiff. Minutes later, a mixtape with a message is thrown at Mort. Julien picks it up off of him, reading the message. The message says the mixtape might help. Julien puts the mixtape into the boombox, and Clover's voice is heard, singing. She stands up, moving both arms. Julien prepares to fight with her, happy she can now fight better. The two win every round.

At the final round, Julien and Clover will fight Wigman. Meanwhile, Maurice reveals Uncle King Julien behind the screen, posing as a snake. Uncle King Julien tells Julien he only wanted to get rid of Clover, but Julien has made it even better by fighting with her. He can now get rid of both. He pulls the cage down for the final match. As Mort is about to play the tape, his tail gets stuck in the boombox. With no mixtape, the two are defenseless. Wingman separates them with one blow.

In her mind, Clover is sitting on a bench. Pineapple joins her, saying there is someone she should speak to. Her grandmother appears beside her. They embrace, as Rose asks what is wrong. Clover tells her that when she saw the wildebeest, she was reminded of the pain in losing her. Rose says she never really lost her, and that she will always live in her heart. She tells Clover to get up and finish the fight.

Clover wakes up in time to save herself. She beats Wigman to a pulp, and he falls down the pit in the middle. Clover has won the Tournament of the Doomed. Julien's uncle looks on in dismay, asking the crocodiles to go and finish them off. They refuse, as he offended them earlier. As he prepares to leave, Maurice knocks him into the pit. He survives by grabbing a branch. The pit closes over him. Happily, Mort gives Clover her mixtape, clean of tail fur. Clover is thrilled to have this back, and asks where he got it from. Crimson appears from the background, saying she gave it to them. She says that in the end, Rose was her grandmother as well, and she wanted her sister to win. Julien is shocked the two have the same grandmother. Clover, pleased, looks to the sky.

In "Frank-ri-la", Rose and Wigman prepare to fight. The fruits place their bets.