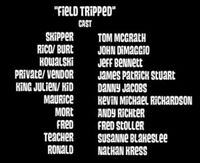 The penguins believe a boy is spying on them and attempt to retrieve his notebook.

The Penguins were just getting some pretzels, but a kid named Ronald spots them. As the Penguins hide behind a trash can, Skipper suspects him writing everything he's seen in his notebook, thinking he's a spy. Kowalski suggests they try his new invention, the brainwashing helmet then Private suggests snatching the notebook then Rico suggests giving him a wedgie, but Skipper plans an unspecified plan. Skipper was ready to commence an operation, but Ronald just disappears and accidentally says "Operation: Hey where'd he go?". Private suspects a brochure of the museum and Skipper saw a picture of Madagascar and thinks that Ronald has been following them for long. King Julien pops up and recognizes his Royal Booty Scratcher on a vine on the picture and also tells them that his butt has been itching. He asks the Penguins to retrieve it, but Skipper says they're in an even more important mission.

Private tries to snatch the notebook, but once again, denied by Skipper. Ronald tries to convince his teacher that the Penguins stole the pretzels, but she tells him to write down mere observations which Skipper thinks is sending him on more recons. Meanwhile, Julien itches his butt badly and asks Mort to boss them. With no idea what to boss, King Julien accidentally knocks down Fred and tells Mort to boss Fred where the museum is. Mort does so, but instead of saying the command, he said, "Yeah! What he said!". King Julien remembers that the smart one rips out a map. The scene cuts to Kowalski ripping out a map and decided to place hidden cameras in some various parts of the Zoo to spy on Ronald, but Skipper reveals that Ronald is just in front of them by Burt's habitat. Private once again suggests snatching the notebook, but Skipper denies it again and then thinks Burt is a spy after seeing Ronald feeding him peanuts. They snatch him and ask him to tell them what Ronald has told him, but Burt says he knows nothing, but Skipper thinks he refuses to tell. Rico vomits an elephant-sized underwear to give him a huge wedgie, but Burt tells them that Ronald was watching them through the door. Skipper then agrees to snatch the notebook.

Meanwhile, Fred recognizes the museum, but can't tell where it is. Maurice tries to tell them it's just behind them, but King Julien tells Mort to boss Maurice to talk in grunts, never words and Mort says, "What he said... AGAIN!". Maurice grunts and points at back and Fred thinks that he might be on to something. As Fred says he recognizes the museum, the view zooms out of the museum behind Fred and King Julien and Mort finally looked at it. The Penguins hide in the kids' backpacks and Rico tries to snatch the notebook, but Ronald retrieves it easily. Meanwhile, King Julien wanders how to get in the museum and Fred suggests they take the front door, but it was a spinner door and King Julien and Maurice are equalizing the pressure. Although, some kids came from the left that pushed the pressure and spun the spinner door. Fred jumps in and the door launches them in the museum and Fred accidentally ends up belly-sliding. King Julien remembers that the Penguins do the belly-sliding and slides Mort, but hits his head on a wall. The Penguins arrive to the museum through the kids' backpacks. Rico vomits a grappling hook to hook them to the vent. Ronald spots them and runs away.

Meanwhile, Fred stands while King Julien slips like a snail then stands in fighting posture like the Penguins after they're done belly-sliding and Mort slides on Maurice then the two stand in fighting posture (except Fred). King Julien finds his booty scratcher in a section in the museum, but as he runs, he smacks to the glass wall. King Julien questions Mort's leadership and Mort can't take the pressure of bossing. King Julien asks Maurice to vomit something from his gut. Maurice grabs a stone hammer and pretends to vomit it from inside him. The teacher finds Ronald and he tries to convince his teacher that the Penguins from the Zoo are in the vent watching them and thinks they wanna give him a wedgie, but his teacher doesn't believe it and takes his notebook. King Julien tries to sabotage the glass with the stone hammer, but Skipper uses headbutt to stop him. King Julien tells him about the importance of his mission: his itch is getting worse than worst. The Penguins agree to get his booty scratcher. As they get in, Ronald spots them and tries to tell his teacher, but the Penguins escaped immediately and took the butt scratcher. The kids and the teacher leave for the bus and Ronald gives up. The Penguins hand King Julien his butt scratcher. Now having the guts to boss, Mort demands King Julien to let him scratch his butt and King Julien appreciates it. The Penguins recognize the kids leaving and run after them.

At the school, the teacher still refuses to believe about the Commando Penguins even in Ronald's notebook. The Penguins pop out and Skipper takes the notebook. He waves his flippers in her face and says his common catchphrase, "You didn't see anything!". Before the teacher could react, Kowalski functions his brainwashing helmet.