Madagascar Wiki
Register
Don't have an account?
Sign In
Advertisement
in: Episodes, Episode focusing on Roger, The Penguins of Madagascar Episodes
English

In The Line of Doody 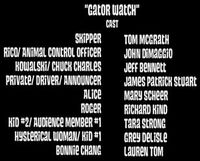 In The Line of Doody

The penguins attempt to relocate Roger after dining with him in the sewers.

After having dinner in the sewer with Roger, the penguins search for a new home for him. They tried disguising Roger as a log, but a woman did not see him as a log. Then they tried hiding him in the museum, but two cousin boys thought Roger was going to eat them. One picked his nose and Roger screamed. Roger then tried to be a gargoyle but because of his fear of heights he fell into the public pool and started Gator Watch. He soon got caught by animal control when he accidentally landed on a play. The penguins planned to get Roger out of the van, so they hijacked a Manhattan motorist's vehicle to chase the van. After a car chase, the penguins got onto the van but was unable to stop the van in time to arrive at its destination. Anyways, they found out that the truck brought Roger to Central Park Zoo.
The episode ended with the news telling that the Manhattan motorist swears that his car was commandeered by the penguins.