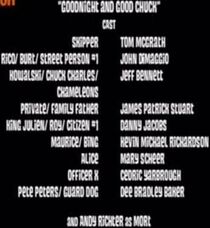 A former news anchor grows suspicious of the penguins when he begins to work at the zoo.

The penguins hear of a news report about anchovies swimming out in the Atlantic, just off the coast of Manhattan. However, Chuck Charles interrupts this broadcast with breaking news that he is being fired and is being replaced by Pete Peters. Private, feeling sorry for Chuck, suggests they help Chuck get his job back. However, Skipper is more interested in the Atlantic mackerel and refuses to carry out a pity mission and knows that Chuck Charles would get another job.

Chuck Charles is then hired to be Alice's assistant, gets into a series of mishaps and eventually leads a tour group, telling the group about the lemurs, in the process guessing (correctly) all of Julien's poses and Maurice's role among the lemurs. At the penguin exhibit, however, he informs the group that the penguins' cute display is a cover for their covert operations. The penguins gasp in astonishment by what he said. Skipper screams in panic and yells to the others that they're revealed, so he quickly then wipes his memory with Amnesia Mist and hide into their HQ.

In there, Skipper assumes they have a mole (literally believing an animal mole ratted them out). However, Kowalski explains that Chuck's reporter eyes see everything in extreme detail and there are no secrets and because of this, he can't help but blab it out to the world. The penguins attempt Private's idea to get Chuck back into his job, but all of it fails as Chuck doesn't witness the setup scenarios at the right time, he then finds Kowalski's last options and tracks it to the penguins' lair. The penguins wash out all of the files on their computers into a CD, which then Rico is ordered to destroy Kowalski's computer's hard-drive. Naturally, Kowalski didn't take the loss of his hard drive well and went berserk on Skipper.

Chuck manages to snag the CD as Skipper and Kowalski are squabbling and realizes he can use the available data on the CD to play on the news and get rehired. Knowing the danger, the penguins use their jetpacks to get to the news station and arrive before Chuck in time to set up defenses. Rico booby-traps the lobby, but Chuck manages to sidestep the chainsaws, barbed wire and mines. Private wakes Rottweiler security dogs, but Chuck locks him and the dog in the restroom. Kowalski attempts to wipe out Chuck's memory, but realizes he's holding hot sauce and not the Amnesia Mist, which allows Chuck to knock out Kowalski. Chuck gets to the news room, but Pete Peters, hearing Chuck talking to himself, steals the CD and intends to roll the videos. Skipper tries to stop him, but hits the switch to the coffee machine, not the cameras. The world then sees the footage, among them Officer X, knowing it's real, gloats he wasn't crazy to all and sundry, including his mum. However, everyone then thinks it's just a fake news story and laugh at it, causing Officer X to cry, Pete Peters fired and replaced by Chuck Charles, whom in gratitude to the penguins finishes up the Atlantic Anchovy report adding " and how to locate them" which he was not preparing to report at the beginning.