Madagascar Wiki
Register
Don't have an account?
Sign In
Advertisement
in: Episodes, Episodes focusing on Maurice, The Penguins of Madagascar Episodes
English 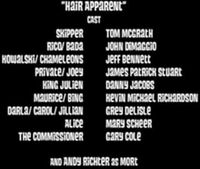 The Commissioner's toupee blows off and soon gets stuck on Maurice's head.

After the penguins fake starvation, Commissioner McSlade instructs Alice to increase the penguins' fish rations and says that he will secure the money for the increase during his upcoming lunch with the mayor. McSlade's toupee then blows off without his knowledge and Alice begins repetitively trying to inform him of such discretely and indirectly. The hairpiece ends up in the lemur habitat where Julien, believing it is a hairy creature, commands Maurice to beat it; in the process, a sticky fruit adheres it to Maurice's head. Julien and Mort then begin to attack the "monster" with sticks as Maurice flees; Maurice's rear is covered in red paint and some of his tail fur ripped off in the chase until it reaches the baboon habitat and the three female baboons mistake Maurice for a male of their species. The baboons begin to pamper him, which makes Julien jealous. Meanwhile, after searching for the toupee, when the penguins learn its whereabouts from Julien, they rip it from Maurice in time to place it back on the commissioner's head before he leaves the zoo.

Polski
Community content is available under CC-BY-SA unless otherwise noted.