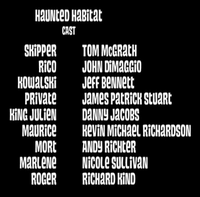 The penguins investigate a spooky noise that frightens Marlene.

Marlene believes her habitat is haunted. After hearing a blood curdling scream the penguins come to investigate. Shortly after, the lemurs come in and King Julien does a ritualistic dance accompanied by a song to appease the sky spirits and remove the spirits. The penguins leave Marlene alone with the lemurs.

After Marlene screams again, the penguins decide her habitat is still haunted. Julien, convinced he could not have failed, believes it must be a new specter. The penguins seed them out and decide to camp out over night. After being awoken by Marlene's snores, the penguins and Marlene hear a moan coming from the sewers. Skipper drops one stick of T.N.T. to show the specter "that we mean business". The resulting explosion throws the sewer grate into the roof and Skipper and Marlene peer into the sewer. After a few seconds the grating falls down and knocks them into the sewer.

After Marlene rescues an unconscious Skipper, they soon find a black silhouetted alligator and try to escape from it, believing it to be a ghost. Marlene figures out that the specter is afraid of her snoring and plays Skipper's tape recording of her snoring. The "specter" is revealed to be an alligator named Roger, who is terrified of Marlene's snoring. After a short exchange, Rico, Private, and Kowalski tie up Roger. Skipper chuckles and comments that they are "tardy to the party" and that Marlene and he have the situation under control.

They are all soon back in Marlene's home and make friends with Roger and Skipper "compliments" Marlene. In the end, the lemurs are shown outside Marlene's home about to sneak into the sewer but they are scared away when Roger pokes his head out.