Madagascar Wiki
Register
Don't have an account?
Sign In
Advertisement
in: Episodes, Episodes focusing on Rico, The Penguins of Madagascar Episodes
English 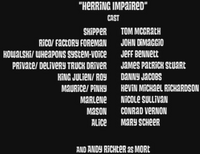 A Visit From Uncle Nigel

When Private, Skipper and Kowalski eat herring that cause them to suffer from a brain disorder, it's up to Rico to stop them from eating any more fish or they'll stay like that forever!

Skipper is building a ship inside a bottle while Rico, Kowalski, and Private are playing cards. Skipper asks for one more piece for the ship's hull, but Rico says that there is no such piece. Believing that weeks of work have been wasted due to a missing piece, Skipper loses his temper and orders Kowalski to cover Private's ears so he could use his "angry words".

The penguins go to Phil and Mason to get the manufacturer's address for payback. However, Phil and Mason insist that there are no missing pieces; the model is of the S.S. Fiskenlukt, a Norwegian fishing vessel that contained a full catch of brine-preserved herring when it sank in the New York Bay a century ago, and the hull breach is part of the model's design. However, the penguins are more interested in the herring and set out to locate the shipwreck by submarine. When they find the shipwreck, they take one of its crates into the submarine, and Skipper, Kowalski, and Private eat all the herring, leaving none for Rico.

When they return to their HQ, the penguins comment on how delicious the herring is while Rico opens up a can of sardines. Suddenly, Private lunges for the sardines in a crazed state, forcing Skipper and Kowalski to restrain him. Kowalski realizes that eating the herring has caused Private to contract Bacterial Pisces Dementia, a disease that turns its victims into fish-craving psychopaths (prompting Rico to comment that it's his thing) and threatens to become permanent if any further fish is consumed within twenty-four hours. Skipper and Kowalski succumb to the disease as well, forcing Rico to prevent his teammates from eating any more fish. He prevents them from eating any fish during feeding time, but the penguins pursue a truck full of fresh cod fillets. The chase ends with the truck flinging the penguins into a tuna-canning factory, much to Rico's annoyance. As the penguins attempt to eat the tuna, Rico notices a giant wooden fish sign and gets the other penguins to go after that. The penguins spend the rest of the day attempting to eat the wooden fish while Rico keeps watch, and the condition eventually wears off.

Back at the HQ, Rico is awarded with a smoked Alaskan Salmon for "conspicuous bravery in the face of himself times three".