Madagascar Wiki
Register
Don't have an account?
Sign In
Advertisement
in: Episodes, Episodes focusing on Private, The Penguins of Madagascar Episodes

A Kipper for Skipper 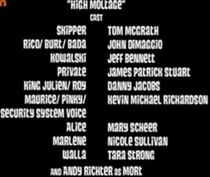 A Kipper for Skipper

The penguins need Private's hypercute to escape Alice in order to see their favorite action star at the cinema, but Private's molting renders him unable to engage the talent.

The penguins are determined to make opening day of Thunder's Lightning, the 17th-film in a series of WW2-themed action movies about an American navy officer that goes by "Commodore Danger." However, Private seems to have developed an itching problem (he complains about his "tail feathers driving [him] mental"). They try to exit the zoo, but Alice has put in a new security system. Kowalski explains it to them as basically if the zoo were surrounded by an electric bubble—humans manage to pass in and out just fine, but if an animal (such as them) were to try and exit, they get electrocuted, while humans are unharmed. They try exit through the front but get shocked once again. They try exiting through a tunnel, but Private takes a shock. Kowalski then tries to deactivate the system with no success.

Kowalski says they need Alice's ID card to disable the system but are unsuccessful in doing so, as her thick neck prevents her from being karate chopped and years of toilet cleaning have made her impervious to gas attacks. Therefore, their only recourse is for Private to use his knockout hypercute (Alice's only known weakness), despite his vow never to use it again. But since he, like the other penguins, wants to make it to opening day of Thunder's Lightning, he ultimately agrees to do it—however, when Private tries using his hypercute, it doesn't work and some of his feathers come off. The other penguins see this happen, and Kowalski realizes that Private's molting—he and the other penguins cover Private and retreat back to their HQ.

The penguins make attempts to cover Private's bare parts with black marker and white correction fluid, only for him to erupt in allergic hives (since that stuff isn't safe to put on bare skin), forcing them to scrub him, which only worsens his condition. They then cover him with a plush penguin doll, but having neglected to put in an airhole, Private bursts through it off before he could suffocate; his disfigured appearance causes Burt to throw up his peanuts.

Kowalski sees Mort attracting the people with his own cuteness and decides to take him to the laboratory to switch Private and Mort's bodies so Private can try to do the hypercute inside Mort's body. There, Julien makes Mort laugh, causing the machine to malfunction and switches Julien and Maurice's bodies (with Maurice's brain ending up in Julien's butt). They resolve to bring Private to Marlene for help. She says Private still has the hypercute inside him and only needs to believe in himself but when he tries to do the hypercute, he instead produces a black precipitating rainbow. The humans riot in disgust, and distract Alice - and even Rico pukes. Since Alice is distracted by the rioting people, they take the card, deactivate the system, and finally get to go to the movie.

At the movie, Marlene questions their success. She grabs some popcorn, but the body of Maurice in Julien's body thinks the popcorn is his, causing Marlene to vomit.