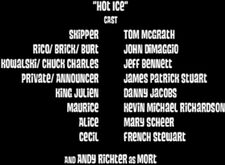 The All Nighter
Before Christmas

Two thieves stash a jewel at the Central Park Zoo, and plan to find it, no matter who gets in their way.

Meanwhile, Cecil and Brick search the zoo, but are caught by Alice. They then find out that the necklace is in the lemur habitat. The penguins were fighting the lemurs for it. Alice then kicks them out of the zoo for disturbing Burt and asking her a stupid question. The penguins get the necklace, and Kowalski shows a measurement of the security footage on the lossful duo and find out that Cecil and Brick are coming back to the zoo at night after they discover Kowalski's poem was secretly recorded on that tape.