For Whom the Bell Gods Toll

"Julien and Maurice fought Thrax, as the crowd held their breath. Although they were victorious, Maurice may have fallen to his death. Sage and Clover found a lunchbox of time, to save Koto from his life of crime. Smart Mort learned to accept his big brain, and journeyed to a new dimensional plane. And Sugarbottoms, freed some snails! Hit the snail trail, little buddies! Chapter Dix!!"
~Recap

King Julien & Maurice pose as a fossa and fight their way to Koto’s wedding; Sage & Clover are captured by Koto; Smart Mort heads to the Mort-verse.

Clover and Sage arrive at the Mountain Lemur Kingdom, Sage's first home. Clover questions why they are here instead of the kingdom, and Sage replies there is something they need to find. Inside a house, Sage steps on a picture, and picks it up, looking at it. Clover comes up next to him and asks to see the picture. Sage explains that it is he and Koto as kids. Clover snatches the picture and comments that they looked adorable. Sage takes it back and reminisces on his haircut at the time. Clover tells him that instead of reminiscing, they should be planning their next move as the ultimate weapon. Sage puts a paw on her back to calm her, and tells her he would rather save his brother than destroy him.

With Julien, Julien tries to convince Maurice to eat his food, but Maurice refuses. Suddenly, they are called in to fight against Thrax. Maurice is terrified. Uncle King Julien tells Thrax to rip this one apart, and if there is anything inside it that looks appetizing, to rip that apart too.

With Timo, he, Mom-Bot, and Mort are prepared to go into Morticus Khan's territory to challenge him for his army. Smart Mort is needed for fixing the portal.

Back with Clover, Sage digs up a lunchbox while Clover looks on, telling him that Koto is purely evil and cannot be made good. Sage shows her the lunchbox he has just dug up. He tells her it is a lunchbox of time. Clover comments that it just looks like a regular lunchbox, but Sage insists it is a lunchbox of time. He tells Clover to buckle up, as he is about to tell her a story that makes sense. He says that when he and Koto where young, they played together all the time. Once, he got hurt playing, so Koto carried him all the way to the medicine man, who healed him. Another time, they came across a bug who was mistaken for a monster. They adopted the bug and cared for them until they died. They kept his corpse, and Sage shows it to Clover. Clover is a bit disgusted that he kept the bug's body all this time. Sage then tells his final story. Once, he and Koto were eating fresh corn, until Sage's tooth came out. As it was an adult tooth, it hurt quite a bit, and would not grow back. Suddenly, Koto ripped a tooth out from his own mouth and lodged it in the gap where Sage had lost his tooth. They happily continue eating the corn. Clover is amazed at how deeply lodged in the tooth is, and Sage tells Clover there is still good inside Koto. A black hawk watches the pair from a distance before flying away.

Julien and Maurice prepare to fight Thrax, and Uncle King Julien announces this will be a fight to the death.

With Timo, Smart Mort is fed up of Madagascar and believes he is too smart. Through a song, Mom-Bot convinces him that it's okay to be himself, and be smart. He fixes the portal and the trio walk through.

Back with Clover, she agrees to support Sage in his plan to save Koto. He happily accepts her support. She then stands with her arms out, telling Sage to call his hawk. Sage climbs on top of Clover, and calls for his hawk. Instead of his hawk, a black hawk comes barreling towards them. They try to run but Clover is knocked down by the blunt end of a spear. On the ground, the couple look up to see Koto and some of his guards surrounding them. Koto picks up Sage's picture and crunches it, laughing. Clover and Sage glare angrily at Koto.

Julien, and Maurice fight Thrax and continue to lose. However, Julien accidentally hits Thrax, knocking him into a wall. Finally, he and Maurice kick Thrax as he goes to attack the two again. Thrax is knocked unconscious and defeated. Julien and Maurice cheer in victory, but Maurice steps on a snail, and they fall into the "bottomless" pit, screaming.

In the Mortverse, Timo, Smart Mort, and Mom-Bot arrive to challenge Khan. Morticus Khan arrives and meets Smart Mort, who asks for his army, but when Khan says no, Smart Mort gives up. Smart Mort switches back to regular Mort. Mort says hello to Timo and Mom-Bot, but he becomes quickly confused after noticing that they're in Mortverse.

Back in the Mountain Lemur Kingdom, Clover and Sage are tied up to each other. Even Sage's hawk is bound. Sage begs Koto to listen to his brother, but Koto does not listen and says they are no longer brothers. Sage shows Koto the lunchbox, and Koto picks it up, pretending to be interested. He suddenly turns, smacking his brother and throwing aside the lunchbox. He laughs, telling Sage he is weak. Sage responds, telling him he is ashamed of him. Koto tells him his shame is powerless, and that he will wed Princess Amy and "make Madagascar great again". Before they leave, Koto rips out his old tooth from Sage's mouth and orders his guards to burn the village. As the Mountain lemurs burn the village to the ground, Sage growls, enraged at his brother's deception.

Julien and Maurice are holding onto their foosa suit as they hang from a branch. When the weight nearly pulls the branch down, Maurice prepares to sacrifice himself. He tells Julien he loves him, and to take back his kingdom. Julien tries to tell him not to do it, but Maurice lets go, crying, much to Julien's despair. Maurice cries to Julien that he loves him and disappears in darkness. Julien too starts to cry, but he pulls himself out of the hole. His ill-tempered uncle steps down from his perch, screaming at Julien that he cannot “die right”. He orders Mary Ann to eat him, and she nearly does, as Julien plunges himself into her mouth, not wanting to live anymore without Maurice. Mary Ann realizes that Julien is helpless now without Maurice, which makes her to watch at him with remorseful expression on her face. Suddenly, there's a maniacal laugh can be heard from distance as the flying party chair and Karl arrives, telling Julien he wishes to help put him back on the throne. Julien is surprised, while the others stand in confusion. Underground, Maurice's unconscious body is panting very fastly as he is seen getting dragged into the shadows by someone from off-screen. Maurice then weakly utters:"King Julien..." as the episode ends. 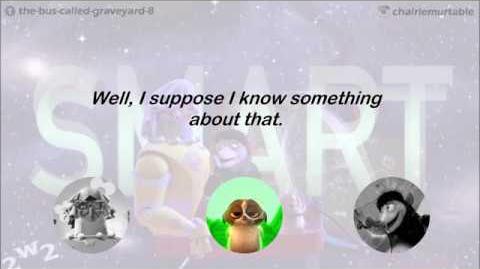