Madagascar Wiki
Register
Don't have an account?
Sign In
Advertisement
in: Episodes, Episodes focusing on Kowalski, Episode focusing on Marlene, The Penguins of Madagascar Episodes
English

I Know Why the Caged Bird Goes Insane

I Know Why the Caged Bird Goes Insane 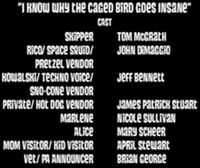 Kowalski's intention of attending the InvExpo gets spoiled when a billboard critically damages him leading him to stay in a nursery for a few weeks.

Kowalski’s dream of attending the giant Invention Expo, or InvExpo for short, have to be put on hold when he's laid up with broken legs. He goes insane with cabin fever, having not to attend InvExpo as Skipper, Rico, and Private are having fun without him. Then a Space Squid comes down to the InvExpo to find a great invention for his own purpose but while failing to find the perfect creation so the Space Squid breaks in the Penguins HQ and snatched Kowalski's Extend-o Grab to do finger activities. With the other penguins occupied, Kowalski has Marlene help stop the space squid and Marlene successfully pokes the space squid with the Extend-o Grab, forcing it to flee.

Later the other penguins crash on a wall by accident. They notice Kowalski got out of the hospital. Kowalski realizes that he doesn't have to go to InvExpo since he already witnessed the greatest invention was his Extend-o Grab, giving Marlene a high-five in the end.