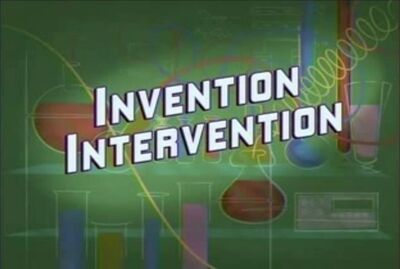 Kowalski: (explosion breaks his lab door down which slams into the other penguins) Rounding error! Sorry!
Skipper: Kowalski! (Kowalski comes out with an invention) What in Neptune's net is that?
Kowalski: My latest creation, Skipper, an infrared herring toaster!" (fish skeletons pop out of the toaster) Guess it wasn't infra-ready yet. Heh-heh!

Rico slides over to the toaster-like contraption, eager to find some fish. He touches the skeleton, electrocuting and sending him flying backward in the process. Kowalski hides the invention behind his back.

Skipper: Kowalski, you're inventions have been a parade of disasters. Jeopardizing us, the Zoo, and Manhatten itself!
Private: And the outlying burrows.
Kowalski: I admit there have been some... unexpected consequences--

Skipper: (interupts Kowalski) Until further notice, there will be no inventions, experiments, or envelope-pushing of any kind!
Kowalski gasps, Private gasps, and Rico burps electricity.

Kowalski sneaks into his lab, then starts inventing without Skipper noticing, then suddenly, Private bumps into him.

Private/Kowalski: AARGH!!
Private: (noticing invention) Kowalski, are you...ENVELOPE PUSHING?!?!
Kowalski: Well, I could ask you the same thing!!
Private: No you couldn't, I just got up to get a drink of water!!
Kowalski: Oh. Well...I could ask you a question, one involving long division! And THEN you'd be in the hot seat, wouldn't you?

Kowalski: Alright, fine, yes, I'm inventing!...Just a little. Bordering on a lot. I call it the "Transparent Matter Maker", or "Transmatterer" for short. It turns things invisible.
Private: Well, why not just call it an invisibility ray?
Kowalski: Someone already took the domain. AGAIN, the Internet has vexed me!!
Private: But what about Skipper's order?!
Kowalski: I am going to prove to Skipper that I can invent something that won't go haywire! Note the fail safes.

Kowalski puts safety equipment on the Transmatterer, such as life rings, traffic cones, yellow tape with black stripes, construction barricades, and a side mirror. The work process ends with Private looking concerned.

Kowalski: Trust me, nothing can go wrong. (safety equipment falls on him) Except that!

Kowalski goes out to the park to test out the Transmatterer.

Kowalski: Ah, inert organic matter, an ideal test! (activates the Transmatterer which blasts a tree with a laser, turning it invisible while Fred is seen sleeping) For the win! This'll show Skipper!!
Fred: (wakes) Wha? He-he-hey!

Kowalski: (seeing Fred in mid-air) Fred? Fred, don't panic! I can explain...!
Fred: I guess while I was asleep, I turned into a flying squirrel.

Fred walks forward an inch, then he falls down, knocking his head onto the Transmatterer's control panel which fires the device. The green beam ricochets off of mirrors in a mirror shop, off a hupcap of a car, off the side mirror of a truck and back in Central Park towards the Transmatterer. Kowalski screams as he jumps off the device just before it becomes invisible.

Kowalski: Leave it to you to find the one contingency I hadn't planned for, the Transmatterer turning ITSELF invisible.
Fred: You're welcome. If you need help with anything else, I'll be...err...So where's my tree again--!
Fred bumps into the invisible tree.

Kowalski: (dissapointed) Uhhgh! Back to the lab!

Kowalski props a wooden ladder against the invisible Transmatterer and he clumbs up onto the seat. He starts up the engine, and he starts riding out of Central Park, with the ladder toppling to the grass. Kowalski begins heading the other way to get to the zoo, with it riding over the ladder.

King Julien: (on the top of his bouncy) What is that silly-willy penguin up to? No, It could not be, is he...miming? (comes in front of Kowalski's Transmatterer) Lame!
Kowalski: Beg your pardon?
King Julien: Eh...your mime? It is so lame with the floaty-floatiness. Watch and learn... (doing the Shrinking Box) The box is being to small! Eh! (pretending to pull rope) UHGH! This rope is so HEAVY! Uhgh! (does walking against the wind) Uhgh! Uhgh! The wind is so strong! AHGH! And very dry! Eh, my lips are chapping!
Kowalski: I'm not miming, I'm--
King Julien: (interupts Kowalski) That's true. Your mime savvies are, eh, feh! Watch, I will mime it better for you.


Julien hops on the seat with Kowalski.

Kowalski: (getting angry) No, no, no! Stop! Get off!
King Julien: (pressing random buttons on the control panel, not acturally seeing it) You see? I am so good, that I can even feel what it is I am miming!
Kowalski: (grabs Julien by the shoulders) You're getting in the way!
King Julien: (grabs Kowalski by the shoulders) No, YOU'RE getting in the way--


The Transmatterer full throttles in reverse through a brick wall, into the park, leaving Kowalski and Julien beind.

Kowalski: THE TRANSMATTERER!
King Julien: (dazed from the fall) The what-sa-matterer?


Kowalski chases after the Transmatter, along with Julien, through the park until it drove into the city.

Kowalski: (sees the Transmatterer crashes into cab, then fires randomly) Oh, no! The Transmatterer's firing randomly! (dodges a blast and then dives into a bush for protection) Julien, get down!
King Julien: Oh, I WILL get down! To this funky light show! Ahehe!

Kowalski: (crawls up to Julien) Julien!
King Julien: (annoyed) WHAT?!?


Julien gets hit by a beam and turns invisible.


Kowalski leaves and chases after the Transmatterer.

King Julien: (looking at self in mirror) Heh, check it out! Not here!


Kowalski runs into the middle of the street and stops.

(Kowalski gets Private to help him find the Transmatterer)

Private: Maybe you should just tell him—Kowalski: NO! This is only a minor setback. I'm sure, between the two of us, we'll be able to find an invisible machine randomly roaming the city. (Throws Private out of hole, lands right in front of Skipper, who suddenly appears out of nowhere, along with Rico)

Skipper: And where are you two going?

Skipper: Snowcones?...Ah, good call, a little Arinara is just what this outfit needs. C'mon, men! (Slaps Private to the ground, Skipper then sees a building being turned invisible) Sweet sour corn! That building just disappeared!...(Runs up to Private and Kowalski, faces Kowalski) I know who's behind this!...

Skipper: Dr. Blowhole! This has his mad flipper-prints all over it! NOT THIS TIME, BLOWHOLE! YA' HEAR ME?!? YA' BOTTLE-NOSED FREAK! (Kowalski worries)

(Cut to Burt eating peanuts, a still invisible King Julien picks up a couple of peanuts)

Burt: And just where do you think YOU'RE going?...(Grabs peanut, but can't pull it off) Something's wrong with these nuts!

King Julien: I'll say, you got elephant-boogies all over them! (Bert yells in surprise) This 'not being seen' has it's fun side! He-he!

Skipper: Funny business a 12:00! (All 4 notice Transmatterer by the beams)

Kowalski: You mean, until I think of something that's plausible, but not the truth! (Transmatterer blasts another building, making it invisible)

Human: (Takes a bite of burger) Well,(Beam strikes building, making it invisible) I may just get up and quit.

Kowalski: Private, I'm sorry for this sudden emotional outburst, but YOU NEED TO FOCUS!

Kowlaksi: Now, I just need to get close to shut it down!

Private: Then, that's easy peasy for you.

Kowlaksi: NO, IT'S NOT! (Covers beak, Skipper glares at them)

Skipper: Why would Blowhole make an invisibility ray? Disintegrating is more his thing.

Kowalski: Um...Who can fathom the mind of an evil genius, right?

Skipper; Private, that's quitter talk! This unit does not cut and run!

Private: No, I say we ram it with the bus!

Kowalski: You can't! That might destroy the Trans—Skipper:--portation system as we know it? Nah, it's just one bus!

Bing: (Bada is swinging on tireswing) Yo, Bada! It's my turn! (A still invisible King Julien pushes Bada out of tireswing)

Bada: Yo! What you do that for?

Bada: Yo, you givin' me the business?

Bada: Somebody's givin' me the business!

Bada: Then who's givin' me the business?

King Julien: Ah, what? Have you not seen a tire swing swinging all by itself before? (Rocking tireswing) Hehe!

Skipper: (Starting up the bus, Rico hacks up boot to take the breaks and the gas, Kowalski takes throttle lever) Men? I won't lie to you, the odds that we pull through all this are less than a White Christmas in Tallhasse! (Kowalski stares at Skipper) Florida? (Private stares at him) Generally warmish in December. (Both Kowalski and Private stare at him) How about this? The odds stink!

Private: (To Kowalski) Tell him!

Skipper: --feel the same, Kowalski! It's been an honor seving with you, too! Let's roll! (Rico presses gas, bus moves fast, heading straight for Transmatterer, Transmatterer fires at bus, making it invisible) Steady!...Steady!...JUMP! (All 4 jump off of bus quickly, Bus rams into Transmatterer) We stopped Blowhole, saved the city, and lived to tell about it! Good on us!--(Invisible transmatterer glows in a visible light) Kowalski? Report?

Kowalski: (Looking closely at Transmatterer) Sounds like an overload, Skipper! If this thing explodes, it could turn EVERYTHING invisible!

Private: Can you diffuse it?

Kowalski: Well, I...(Sighs)... I can reverse the polarity, making everything visible again, but I'd need my tools, and they're all the way back at the--(Rico hacks up toolbox, Kowalski wrenches Transmatterer)

Private: I knew something bad was gonna happen!

Kowalski: Relax, Private! All i need to do is push a series of geometrically shaped buttons in the right order! Square...Triangle...Hexagon...And the rarest of all, an Inverted Dodecahedron!

King Julien: (Still invisible, holding a banana with Bada and Bing watching) OOOOOOOOOOOOH! (Sticking banana into Bada and Bing's noses) I am a spooky banaaaanaaaaa! (Smacks Bada and Bing with banana) How do I sooouuuund in front of your stupefied hairy faces! Hahahaha! (Becomes visible again due to Transmatterer being destroyed) Maybe I am a magic talking fruit! Huh? Maybe! Look!

Bing: (Seeing King Julien) Yo', Bada, do you see what I see?

King Julien: (Scoffs) Silly monkey-apes! No one is seeing me!

Bada: Hey, we ain't nobody, lemur!

Skipper: (Destroyed Transmatterer is visible again) Look at all these safety features!

Kowalski: Yes, clearly the invention itself was flawless!

Skipper: Maybe if you'd step up you're game to Blowhole's level, we could risk you back at the lab!

Kowalski: Well, as it turns out—Skipper: --turns out it's tough for you to appreciate someone elses achievements, I get it!

Skipper:--dream of this kind of breakthrough! Well, keep dreaming. Maybe someday, who knows?

Kowalski: Uh, actually, I was going to say that I--

RETURN TO
Community content is available under CC-BY-SA unless otherwise noted.
Advertisement