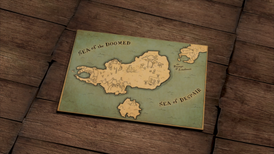 The Island of Madagascar is an island which belongs to the continent of Africa and is the primary location of Madagascar and All Hail King Julien. The island consists of several nations, most notably the Kingdom of Madagascar, which was the royal seat for King Koto and 13 kings of the Julien lineage until the powers of the kingdom were handed down by King Julien The 13th to Gecko Steve, and the Fossa Territory.