Madagascar Wiki
Register
Don't have an account?
Sign In
Advertisement
in: Episodes, Episodes focusing on Kowalski, The Penguins of Madagascar Episodes,
and 4 more 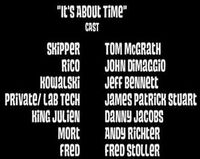 Kowalski travels back in time to stop himself from building a time machine.

Kowalski announces that he has invented a time machine which he calls it the Chronotron. Skipper and Rico are eager to use it for the sole purpose of beating up hippies, but Kowalski informs them that the machine is incomplete, requiring "5 ounces of Macguffium 239". While retrieving the Macguffium from a laboratory in Midtown, Private meets Kowalski-A, who warns him that the Chronotron's activation will doom the universe. Private suggests that Kowalski-A simply explain this to his counterpart but the latter refuses, stating that if he comes into contact with his past self, the space-time continuum will be ripped asunder by a chronal vortex.

Acting on Kowalski-A's orders, Private attempts to destroy the Macguffium. He eventually succeeds, only for Kowalski to reveal that he has a spare sample. While Kowalski finishes his work on the Chronotron, Private meets with Kowalski-A. As the machine is too near completion, and since directly intervening would create a universe-destroying paradox, Kowalski-A enters the penguins HQ hiding inside a shoebox and, using Private as a mediator, attempts to talk Kowalski into destroying the Chronotron, in which he eventually succeeds.

Meanwhile, Skipper meets Kowalski-B who warns him that the Chrontron's destruction will result in the end of the universe as a paradox (in this case, this paradox would be an example of the grandfather paradox). Hidden inside a laundry bag, and using Skipper as a mediator, Kowalski-B attempts to stop Kowalski destroying the Chronotron. An argument breaks out between Skipper and Private, with Skipper attempting to use the Macguffium himself. Private steals it and, in the ensuing chase and fight, each learns about their future Kowalski's.

Skipper recovers the Macguffium sample and returns it but is stopped by Kowalskis-A and B, inadvertently revealing their existence to Kowalski, who was trapped in a barrel with Rico. The resulting paradox creates a rift in the universe which rapidly begins sucking in nearby objects. Seeing what his invention has done, Kowalski uses the Chronotron to travel back and stop its completion - becoming Kowalski-A. Private points out to Kowalski-A that if he never invented the Chronotron then he wouldn't be able to go back in time to tell himself not to. Realizing this will cause a paradox, Kowalski-A goes back to find Skipper - becoming Kowalski-B. Realizing that the rift cannot be stopped by time travel, Kowalski gives up. However Rico, fed up with the trouble caused by the Chronotron, throws it into the rift, sealing it. With the universe saved, Skipper declares "Case Closed", despite Kowalski's protests that such a simple thing defies all laws of the universe. He then orders Kowalski to invent something which "won't destroy the world" - like a snow-cone machine.

The end shows New York almost completely buried in snow-cone mix, with no structures standing upright. Skipper drops his knees and yells, "Kowalski! You maniac! He did it. He finally really did it." Kowalski walks up with the other penguins, admitting that he messed up, but points out that he (at least) made good snow-cones, which Skipper agrees with.

Macguffium 239 refers to the McGuffin plot device, "a plot device in the form of some goal, desired object, or other motivator that the protagonist pursues, often with little or no narrative explanation".

Near the end, the Statue Of Liberty sunken into the snow cone mix, and Skipper yelling "Kowalski! YOU MANIAC! You did it! You finally really did it!" is a reference to the ending of the original "Planet Of The Apes."

The Statue of Liberty being sunken into snow cone mix looks very similar to when it was frozen in the disaster film "The Day After Tomorrow."