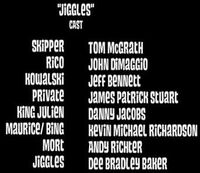 The Falcon and the Snow Job

Kowalski's latest creation goes on a rampage eating himself and King Julien.

Kowalski finds himself suffering from inventor's block, but after some trial and error makes an indestructible gelatinous mass which he imprints on and proudly names as Jiggles. Skipper claims that naming the abomination is not a good idea, but Kowalski ignores him and starts analysing his new breakthrough. He notes that Jiggles doesn't like fish, but he does like fruit. Whenever Jiggles eats fruit, he grows. Meanwhile, Julien is making a fruit smoothie, but uses too much fruit and throws them too quickly.

Jiggles eats some fruit Julien dropped out of his habitat, continuing to grow. Kowalski, now thinking of Jiggles as his own child, finds it and takes it back to his lab, but the other penguins are getting seriously concerned about its monstrous nature, especially as it was now bigger than all of them. Kowalski is now talking to Jiggles, but it leaves and takes Bing's bananas. Jiggles is increasing in size, and Kowalski is becoming increasingly unhinged, with Skipper getting more and more concerned.

Rico regurgitates screws to lock the door, but Jiggles makes a hole in the roof to escape. Kowalski reluctantly admits that Jiggles is getting too big and makes a plan: Rico gets a coconut-pineapple sunscreen that they will spray on a big X. When Jiggles comes, they will trap him and hide him away forever.

Unfortunately, the first to arrive is Julien, who promptly sprays himself all over. Jiggles arrives and eats him, but doesn't digest him. Kowalski reasons that Julien was a "Jiggles-hater", then completely loses it, accusing the other penguins of being haters and leaving with Jiggles.

Kowalski hides Jiggles in a garage and feeds him while raving about how they are the only ones to understand each other. Unfortunately, Kowalski has been handling so much fruit that Jiggles eats him. Kowalski finally admits that Jiggles may be a problem, with King Julien sarcastically drawing attention to it. He tries to vomit up the fish he had for lunch, but laments that he is not as skilled as Rico. The disgusted Julien has to stick his hand down Kowalski's gullet and pull out the fish.

He finds the fish and Jiggles spits them out, but it still thinks that they're fruit. Kowalski realizes that he needs his friends - fortunately they come to help block in Jiggles while Kowalski fetches something and uses it on Jiggles. The group thinks Jiggles is gone, but it turns out that Kowalski has only used the shrink ray on Jiggles to make it small again, and intends to keep it...