King Julien wants a do-over to become King Julien 2.0 and actually listen to his people. But when everyone feels their voice is the most important, the kingdom becomes a chaotic mess. 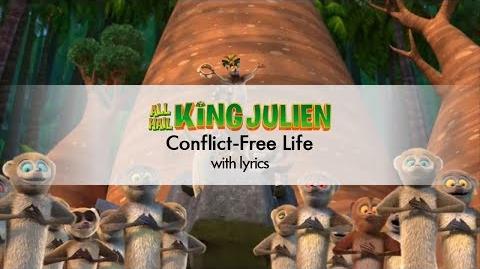 King Julien wakes up that day, after a dream where he fights Koto with hi keytar. After having a tour around his kingdom, he decides to listen to his peeps and rebuild the kingdom, but not his opinions. Meanwhile, Clover leaves to help Sage to find a place to put up the new mountain lemur kingdom, where she meets the Mt. Lemur Captain.

However, in the lemur kingdom, KJ gets opinions that aren't anonymous. However he finds an opinion to make the kingdom a " conflict free life ". When KJ and Maurice have an inspection, they here Horst and Pancho fighting. The reason was that Horst said he can't give a sip from his beverage and called him a felon.

Consequently, KJ invents the "victim horn" to prevent someone hurting you from words. With horns throughout the kingdom, noise pollution occurs and the sound is to be unbearable. When they come to the throne room and start to blow horns, KJ says that he will give them a Conflict free zone which is a " Nourishing womb" that anyone can come when it is " too horned ". Then, the people push KJ and Maurice out of the throne room.

Out in the forest, Julien weeps that he just wanted to give his people peace and kindness. Then he gets an idea and falls like he is dead, where Maurice grieve. Maurice mourns.

The entire Kingdom falls from the plane and when aggravated Horst declares that he is leaving Madagascar, they learned about King Julien's "death" and Pancho asks what Maurice did. Maurice says it was the kingdom's fault, saying it was too much for Julien to bear. The kingdom feels remorseful for their actions so they decide to rebuild the kingdom that would make the king proud.

Once they're gone, Maurice is surprised that KJ has awoken, and Julien explains that he just pretended to be dead so he could make his kingdom into martyr and teases Maurice for falling into this. Maurice is both confused and furious with the King for pranking him asking what's going to happen what everyone will find out that he's alive. Julien is unconcerned and believes that for a few weeks everyone will forget about that any of this ever happened. Julien then ends the episode by enthusiastically exclaiming:"Julien 2.0, baby!"