Madagascar Wiki
Register
Don't have an account?
Sign In
Advertisement
in: Episodes, Episodes focusing on King Julien, All Hail King Julien,
and 2 more 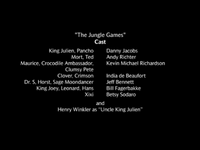 Julien bets that his team can beat Uncle King Julien's, and he puts the whole kingdom on the line. The only problem? Julien's star athlete is dead.

Xixi and Horst introduce the "64th Every-So-Often Jungle Games", with competitors being the Lemurs, the Foosa, the Crocodiles, the Rats, and surprise Uncle King Julien with his team of Crimson and Sage.

Back at the plane, King Julien can't believe that his uncle is competing in the games. Uncle King Julien says its completely legal, and throws him the rule book which lands on Maurice. Maurice confirms that any sovereign nation can compete in the games. King Julien is outraged that Sage would join his uncle's team, but expects it from Crimson. King Julien, however, is still confident that his team will win. Uncle King Julien makes a bet with him that if he wins, he gets his kingdom. Worried by this, Maurice tries to stop him, but it was too late. As the bet continues, if King Julien wins, his uncle has to leave and never bother him again, and clip his toenails (since they're unkept, according to Julien, his uncle lacks feelings and unhygienic, much to Mort's disgust). The two spit and shake hands, then Uncle King Julien leaves laughing.

Maurice is worried that King Julien wagered his kingdom in a bet, but King Julien is still confident because he has Hans on his team. Clover asks who Hans is, having never met him. Julien explains that he is the best athlete and spends most of is time training, and they will only lose if Hans is dead.

The group is mortified to find that Hans is in fact dead. Ted comments on the irony of Han's dying by being crush by his trophies. Maurice offers that Julien can compete in the games but Juilen says that is not an option.

Julien goes to Dr. S to bring Hans back to life, which sort of works, but turns Hans into a zombie.

At the first event of the games, spear throwing, a foosa bites the spear in half, a rat throws the spear up and back down on himself, and a crocodile can't pick up the spear. Sage throws the spear perfectly. Hans throws the spear further then Sage, but gets disqualified since Han's arm was still attached to the spear when he threw it. Sage is the winner of the event.

King Julien mad at his loss, and tells Mort to get rid of Hans, and Maurice to help pick out a new champion for the games. The four options are Clover, Ted, Dorothy, and Pancho. When Maurice asks Julien to compete in the games, Julien has a vision of Leonard saying something is too high. Julien decides Clover will be the champion, but changes it to Ted because Clover is above cheating and able to win fairly, while Ted is fine with cheating to win.

Mort, who is mad that he has to babysit Hans instead of being with King Julien, starts to form a friendship with Hans after Hans throws him into the water multiple times and the two run through a field of flowers.

It's the second event of the Jungle Games, speed walking. Julien pretends to be an in danger, calling for help. This prompts Sage to call his hawk, leaving the games. Ted wins the event. King Julien shows smugness to his Uncle, and his uncle says he'll play dirty too. He puts Crimson in the game.

It is now the third event in the games, competitive packing. Ted is almost going to win, but Crimson puts a scorpion on his back which launches him into the air. The rats win the event.

Clover is mad at Crimson, who comments about her losing her job. Clover goes to the king and asks to be put in the games, since Ted is out of action. Clover tells Julien that she'll lie, cheat, and steal.

Back at Mort's hut, he and Hans are having a tea party. There is a knock on the door from Dr. S, saying he is looking for Hans to take his body parts. Mort says he doesn't know where Hans is, closes the door, and tells Hans he needs to hide. Mort tries to hide Hans in different places but ends up in the toilet. Dr. S shows up again asking where Hans is, but then Ted yells "Toilet Zombie", revealing Hans and forcing him and Mort to flee from Dr. S.

Mort and Hans are still running. Mort tells Hans to run away so Dr. S can't take his body parts. Mort cries as Hans walks into the jungle.

The final event is near, with the final three contestants, King Joey, Uncle King Julien, and King Julien. King Joey goes first by bouncing the trampoline on his head. Next is Uncle King Julien, who does an excellent performance ending with swallowing fruit. King Julien says to Maurice he can't do it. Maurice says to him that he did trampoline performances a thousand times, so what is the problem. King Julien tells Maurice of his past, where he competed in pair trampolining tournaments with his partner, Leonard. They were the best until the accident, where Julien landed too hard and sent Leonard into the sky. Julien vowed to never trampoline competitively again. Maurice says to Julien that Leonard didn't die, he just retired, and he is actually in the stands watching.

The guilt of Leonard leaves King Julien. He does a classical themed trampoline performance with a very beautiful poses, which leaves the crowds clapping and Maurice sheds a tears of joy of how this was beautiful. Leonard congratulates Julien, and now Julien knows Leonard is alive, he says they should get lunch to catch up.

At the end of the episode, King Julien says he learned something. Maurice thinks it is to not bet your kingdom, but Julien says he learned that even though he lost, he still won. He laughs. Mort is back in his house, pouring tea, and hears Hans groaning. He opens the door and finds Hans's arm on the ground, for Mort to remember him. Mort starts crying with smile, and Hans' hand wipes Mort's tear away, much to his shock.