Lord of the Fruit Flies

In honor of his retirement, Karl hosts an elaborate contest to find his successor – who will become Madagascar’s next super villain. Meanwhile, Mort has been visited by his criminal grandfather, who takes his revenge on Julien Kings. 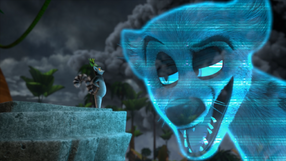 The episode begins with King Julien and his people partying under the Central Baobab tree. Meanwhile, the rest of Madagascar’s people are living their normal lives. Out of the blue, a dark cloud covers Madagascar and begins to show characteristics of a thunderstorm. Julien asks his people not to panic but asks Maurice if this is normal and is not the world's end. However, Maurice whimpers in fear. Karl and Chauncey show themselves as a picture in a cloud, to announce their retirement and movement to Florida. Julien seems happy and turns away with Maurice, but Karl stops him to say that he is to begin Karl Con, where five contestants can participate with a partner. They need a golden mango as an entry slip and the one who wins Karl Con will be King Julien's new nemesis. The people of Madagascar begin to search for the mangoes.

Back at the throne room, Julien thinks that no one can take him down if he is his own nemesis. Even Maurice agrees with King Julien's suggestion and Clover is amazed see that all 3 of them are on the "same page". King Julien sends Clover to find a mango. Willie finds the golden mango, but Clover hits him and takes it back to King Julien. King Julien laughs in joy. Clover tries to convince King Julien to take her but not tell it directly. Meanwhile, Mort tries to be his partner. Clover gets fed up and says directly to take her. Julien says to tell things directly and Clover groans in frustration. Julien says Maurice to a job, which is still unknown.

A huge screen is placed to see the competition while the kingdom cheer for their favorite player. The night before, Mort meets his Pop Pop (Grandfather) and is happy. Pop Pop says that he missed some Hanukkah so decided to give a gift. Mort thinks it is a pencil, but it is the last golden mango. Mort asks how he brought it and Pop Pop says that anything is possible if you break rules and parole. He then takes Mort to Karl Con. All contestants are at Karl's lair and Clover says to stay on alert. Karl comes coughing and Julien laughs, probably to mock. Karl turns a switch and takes his contestants inside.

Karl shows his laboratory where he make deadly weapons with the help of his cockroach. He says the only rule at this stage is "No Touching." Grandpa Mort asks whether one gets the license to kill when the title "King Julien's nemesis" is given. Before Karl completed his answer, a cockroach creeks because Butterfish keeps his foot on it, to take a toffee like explosive. Karl blames him, but Tammy defends him. Karl sucks them out and reminds the others the only rule. All stare in fear.

Karl take them to a table full of food. Julien is glad to be his nemesis so he can eat all time. But Karl stops them from eating because he says them to savour the moment which is a quality of a true, evil nemesis. Pancho says that they are starving and Karl says to savour. Karl says that one who eat looses. Julien asks what he or she looses and Karl leaves saying that they will have to wait and see. Grandpa Mort says to the "kids" to take the food and eat at the same time, but before he completed his sentence, Amy begins to eat. She asks not to judge her. Suddenly, Amy's stomach rumbles. She asks her dad what is happenning, which the Ambassador is unaware. A door opens and Amy begins to fart. With her dad, Amy flies out of Karl's lair.

Grandpa Mort says that Mort will become an evil villain which he couldn't but Mort says that villains must be bad. He says that he only becomes bad when a voice accuses him about crimes he don't remember of committing. Both laugh. He says that evil is inside them and persuades him to win by stating that he will have more one-on-one time with the royal feet. Mort dreams of how he will be dancing to a smooth tune of DJ Glitterbunz with the royal feet. He agrees and goes to sleep. Pop Pop laughs sinisterly, hinting something bad. Clover is angry and punches the wall. She says to King Julien that Karl is taking all one by one. King Julien asks to relax because she freaks him out. Meanwhile, Pancho and Fairfax are trying to escape. Pancho was spotted by a gaurd and Fairfax tries to fly away. He hit an electrocuted wall, which surrounds the lair. Pancho is send to have contact with the wall and both end up been electrocuted. Julien whimpers and ask Clover that they are going to escape in another way.

Sun rises and Karl puts the last 4 contestants to different biomes to experience Karl Brynth and survive it. Clover sets her gear to face danger but King Julien laughs since it is nice place. Clover says something is missing and a missile is fired. 3 Frank like Owl robots begin to attack and Clover carries Julien. Meanwhile, Mort and his Pop Pop is in a volcano. Pop Pop persuades him to win by stating that he can take all the Hanukkah pencils he dreamed of. Mort cheers and says he even like to get the erases which made the paper pink and smudgy. Suddenly, a wave of lava begins to roll and they run. Karl transfer them to round 2 where Julien carries Clover to escape the butterflies who shoot them, while the Mort and Pop Pop fight tentacles. The round is changed. Julien and Clover are to walk a desert while the 2 Morts are battling with the rough see. King Julien and Clover begin to sink in sand and Mort and Pop Pop's ship is sinking. Pop Pop says that this is fake and Mort says that they can drink the ocean. Mort begins to drink the ocean. 10 seconds later, water is in his belly. Mort groans and Pop Pop opens a door. Mort bounces and follows him. King Julien and Clover are sinking and Julien says that it is over and are to die. The kingdom looks at the screen and are sad. Maurice is sad but gets upset when Julien says that it is all Maurice's fault. Then he gets hit buy a popcorn. Clover says that all is mechanical but Julien says it is death and accept it. Julien sadly says that Karl was always going to win. Clover says that they must find a way to defuse the situation. She break an object and stop them from dying. Then, both of them are pulled down.

Mort and Pop Pop arrives at Karl's lair and Pop Pop says that they smell victory. He hits Mort's stomach and he vomits all the water out. He says that they must beat King Julien and shows that Morts are meant to be evil by stating their ability to absorb esscences. He says that they must find a weapon in case they run into Julien and he persuades Mort to help him, by saying that it is to protect him. Mort gives Pop Pop a laser gun and Pop Pop tells him to go. Slowly, Pop Pop takes an explosive. King Julien and Clover falls to a room of mirrors and even the 2 Morts falls into it. Clover asks why Mort is carrying a gun. Pop Pop throws the tasty little burrito at Clover. She tries to hit it but hits a mirror. The explosive blasts at her feet and Mort asks why did he hurt her friend. Pop Pop blames Mort and King Julien says that only he can talk to him like that. He asks the Grandpa Mort to put the gun down and forfeit the games. 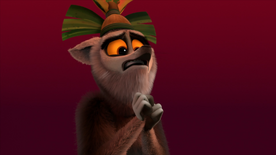 Pop Pop says that all gets hurt and that he rot in a prison cell. King Julien asks what his prison life is to do with him. Grandpa Mort says that it has everything do with his because his great-great-great-great-great-great-great grandfather locked him there. He says that he lost everything because of his family and King Julien says that he don't even know him. King Julien says that he is only about peace, freedom and tasty jams. Pop Pop says that it is late and says Mort to finish King Julien. He says that they are best friends. King Julien says that they are Mort's words. Pop Pop tries to persuade Mort to kill Julien by reminding the holidays he lost which he could have been with his Pop Pop. Ultimately, he decides to shoot at his grandpa. Pop Pop absorbs Mort and gets ready to shoot at Julien. Mort comes out of Pop Pop and bursts him. Julien is happy and Mort dies. Julien tries make him live. He gains life and dies again. An emotional scene is made. This occurs a multiple times until Karl comes. Julien says that they had reached that climax but Karl takes them up to the volcano. He points at King Julien's kingdom and says that Karl Con and Brynth was a distraction. He brings out his giant laser ball so he could wipe out all of Madagascar while King Julien watch it. He asks whether he has any last words and King Julien exclaims to Maurice saying "Now!" Maurice recognizes their cue and turn the other side of their cards, which have mirrors, The laser bounce off and destroy the giant laser. Karl asks who King Julien foiled his most ingenoius plan of all time. He says that Karl had tried to destroyed him using laser and had understood that he is a "laser guy." So he helped his peeps mirror Karl's biggest plan of all time with his biggest plan of all time.

King Julien, Clover and Mort celebrate while Karl hang on King Julien's knees and sob. Clover asks King Julien to come and he goes stating that he won. All the rumble fall on his lair, and by evening, Karl and Chauncey flew to Florida in an air ballon. Back at the plane, King Julien says that he is going to miss him, Maurice cries that he going to miss him too. Suddenly, Julien cries "Pscyh" and laughs. All laughs and it is the ending of the episode.