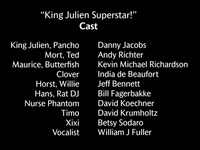 The King and Mrs. Mort

Julien, Clover, Mort and Maurice become musical sensations overnight, but not everyone is happy with how their music sounds.

King Julien, Maurice, Clover, and Mort are having band practice in the throne room. When they finish, only King Julien and Clover are satisfied with their work. Maurice disagrees and thinks they need to practice some more. However, it's too late, since King Julien had already booked them a show at Club Moist.

Since they hadn't practiced enough, their performance goes awry and they are chased away. Ted then gives the band some backhanded compliments outside the club. King Julien gets the idea that they just need to tweak their sound, and head to Timo for help. Timo shows them an autotune machine that completely reinvents The New Wiper Fluid's sound. After releasing a hit song, The New Wiper Fluid becomes a total sensation around the kingdom, nailing concert after concert. King Julien and the boys seem to be loving every minute of it, but Clover is dissatisfied by the idea of deceiving their fans with fake music. However, Julien ignores her. The band then goes on to make a new song to resurge their popularity. Rob McTodd visits the band during a songwriting session looking to join, but King Julien turns him away, using his ugliness as a reason why. As he's leaving, Rob notices that The New Wiper Fluid's sound isn't quite what it seems.

Unhappy with the success of their second single, "Done Like This", Clover storms off the stage during one of their live shows. This disrupts the sound machine and makes King Julien and the boys sound terrible again. The audience is confused as to why the music stopped, and King Julien goes to ask Timo what is going on. Timo reveals that the sound machine is programed specifically for the four of them, and that without Clover, the band is dismantled. King Julien decides not to give up so easily and goes to find Clover, who is loudly banging pots and pans with Sage. When asked to join the band again, she refuses. King Julien holds an audition to replace her, and almost all auditoners fail to match her sound except for Hans. With their new bandmate, The New Wiper Fluid resurges. Meanwhile, Rob becomes completely convinced The New Wiper Fluid is fake, and discovers the sound machine that night.

During the comeback concert of The New Wiper Fluid, Rob tampers with the sound machine, officially exposing the band as frauds. The audience gives chase to the band until Clover steps in to stop the madness. King Julien decides the only right thing to do is play music the honest way. The band picks up instruments and starts singing an upbeat song and end up sounding great, or so they think. In reality, the band is completely deluded and still sound terrible. They end up getting pelted with mangoes again.