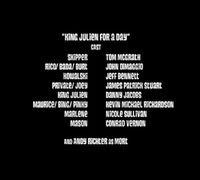 King Julien and Skipper switch places for a day, troubling everyone involved.

When Skipper and Julien bicker about each other's unfitness at a zoovenir shop meeting, Mason introduces a motion that the two change places for a day to gain better mutual understanding. Skipper then becomes the temporary king of the lemurs while Julien commands the penguins, with each expecting the other to fail in their new role. Skipper still having his commando skills and Julien ordering around. Later, after Marlene desires cotton candy from a vendor she had spotted, both Skipper and Julien lead their respective new teams out to procure some, only for both to be forced to work together when the cotton candy cart rolls out of control. While they both praise each other's actions immediately thereafter, the two revert to bickering at the next meeting.