The End is Near

King Julien discovers surveillance equipment and installs it all over the kingdom.

King Julien and Maurice found few thousand cameras in the crate. King Julien decides to use cameras to watch over his peoples, but he makes a new law, when everyone made bad things they're going to be put behind bars. So he gives this job to Clover, who is very joyful about this job.

Clover starts her first shift and when she spies at Maurice, who starts to grumble that no one listens to him, Clover sighs an annoyance and decides not to waste her time on Maurice. When Clover looks at Andy Fairfax's and Pancho's felony, she arrests them. However she ends up arresting the entire Kingdom and putting them to the prison. Ted walks over to Clover and asks her to become her assistant. Clover awkwardly agrees.

After seeing that his people in the prison, King Julien takes out popcorn and munches, while spying at them. Ted starts to sing a song about in jail doing their time as they start to dance the party. Julien becomes shocked, and out of jealousy, he decides to be in prison so he can party with his people. King Julien tries every possible way by breaking all the laws of the Kingdom so he can enter the prison but Clover is nowhere to be seen.

Exasperated, Julien enters the prison, where he sees Clover is in prison and asks why. Clover explains that she broke one law. There's a flashback shows Clover waking up and notices that she has awakened on the wrong side of the bed so she arrests herself. The flashback ends with Clover saying that sometimes the law should be respected by itself. When King Julien asks her or Ted to arrest him because he broke all of the rules, Clover says the reason why he isn't arrested because in the book of laws of King Julien the Terrible says that kings can't be arrested. Julien is furious by this. Upset that he broke the laws for nothing, Julien returns to the plane and notices the geckos, who are attached to the cameras, spying on him.

Julien believes that they are attached to him so he won't bother. Julien lies to the ground and sadly asks what's the point of being king when there's no people around. The camera pans to where King Julien was sitting depressingly, but he doesn't notice that someone has been watching for him. The scene cuts to an unknown locations with cameras and KJ has been spied by someone, who's laughing evilly.

Several days later, Maurice, who has suffered from loneliness, starts going crazy that everything seems to be quiet and he speaks to himself in the camera, and beleives that aliens are here (see Close Encounters of the Mort Kind) and explains to the viewers that he put in the cave all the chocolate covered mangoes around and thinks that everything's quiet.

Things are going to change for the kingdom, Clover starts fighting with Tammy, and Zora is getting the letters from someone who's in love with her. At first, she believes that it was Mort, who written the letters, but Mort denies it. When Zora asks who have written all of the letters to her?

Later that night, Julien is seen sleeping until someone captured him after he wakes up.

Julien is shocked to learn that he's in cave and his kidnapper turns out to be Maurice. Maurice starts going crazy until Julien smacks him and tells him to calm down. The both friends notice the chocolate covered mangoes around the trail heading to work the unknown cave. As they begin to investigate, they realize that the cameras were sent (and the one who has been watching Julien all along) by Uncle King Julien. It also turns out that Julien's uncle was the one who has been tirelessly sending all of the letters to Zora and he's also the one who's in love with her. Julien has an idea.

Meanwhile, Uncle King Julien watches from the camera that his nephew lamenting his fate of being king of no people, so he decides to leave the island and his crown. Julien puts his crown to the throne and leaves in sadness. Uncle King Julien returns to plane and takes back his crown and Ted arrives, who's shocked that he was the one who wrote the letters to Zora and is disgusted, because the former King was not the one whom Ted imagined Zora's husband to be.

Julien and Maurice visit Clover in prison and inform her that they know who's responsible so they team up with Ted and they devise a plan to defeat Uncle King Julien.

Meanwhile, Uncle King Julien notices Zora reveals to her that he has been the one who's responsible for sending all of the letters to her. The heroes arrive and arrest Uncle King Julien. Uncle King Julien explains that he planned it few weeks ago believing that it will help me to take this crown back but upon seeing Zora, he wanted to give up his plans and redeem himself by marrying Zora. They kiss, much to Julien's, Maurice's and Clover's disgust and Ted's awe.

King Julien wants to put his uncle to jail, but surprisingly, he decides to not to put him in jail and to pardon him and Zora. King Julien and his uncle finally reconciled and uncle goes to Feartopia with Zora. Maurice asks Julien will they forgive his uncle after everything he has done to them. Julien says no, but after seeing his uncle with Zora, he decides to forgive him. Julian then tells everyone that they can shut down the prison and release their people.

The lemurs are seen outside the prison, releasing everyone (except Pancho, who feels like he deserved in the jail). When the last one is Mort, they realize that Mort isn't in his cell. When Julien looks at Mort's picture of his own feet, much to their shock, there's a hole inside for Mort to escape. Mort escapes, but he knows that Zora with Uncle King Julien, and starts crying, but then he laughs triumphantly, happy that he has done with her for good as he leaves while saying:"Phew. Dodge that bullet.", ending the episode. 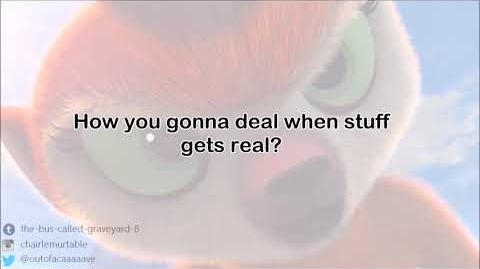