Madagascar Wiki
Register
Don't have an account?
Sign In
Advertisement
in: Episodes, Episodes focusing on King Julien, The Penguins of Madagascar Episodes,
and 2 more
English 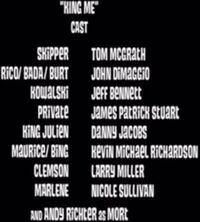 The penguins individually switch minds with King Julien to help him defeat Clemson after he returns and shows Julien that he shall not legally be king.

Clemson comes back and reveals from the lemur king birth certificate to Julien the fine print that says he was not born in Madagascar, so Julien can not inherit the crown, and by "inherit", it means that he can not be king. Clemson also secretly has plans to take over as King himself. The ancient lemur laws of royalty of the pack, however, would still allow Julien to earn kingship by winning a competition, even though he could not inherit the crown, but he is too distraught to be much of a competitor. So to help Julien win, Kowalski uses his mind-switching machine to switch Julien's and Rico's minds to allow Rico to compete for the lemur. The plan succeeds for the first round of competition, but after Clemson discovers what the penguins had done, he makes it so that subsequent rounds are disadvantageous to the other penguins when they switch minds with Julien. But during Clemson's coronation after he wins the competition, Kowalski switches Julien's and Clemson's minds and Julien, in Clemson's body, decrees "Julien" King before the two are then switched back. When they switch back Clemson is chased out of the zoo by Bada and Bing as Julien says something insulting to them while in Clemson's body, while no one knew that Clemson and Julien had even been switched.