The Wrath of Morticus Khan

Julien is lost in the jungle and accidentally saves a mountain lemur named Koto, who stirs up strong feelings in the kingdom.

Atop the largest waterfall in the kingdom, Julien prepares to jump, inside a barrel. However, he is quickly interrupted by Maurice and Clover, who snag the barrel from him.

Later, in the plane, Clover tells Julien she needs to do her job, which is to keep him from hurting himself. Julien tells her he will just schedule his barrel stunt on her day off, but Maurice tells Julien he cannot do this, as if he lost his life, his people would be devastated. Julien ignores him, "agreeing". Clover rolls her eyes and Maurice gives him an annoyed glare, but all Julien can say is that he promises. However, he crosses his toes, making his promise void.

Later that night, Julien heads out with his barrel and a camera. After almost being caught by Ted, the assistant captain of the Ringtail Guard, he makes it to the top of the waterfall. He takes a picture of himself for proof, before jumping, screaming. He ends up uninjured. However, just as he begins to relax, he falls down a much larger fall. He lands atop a huge snake, who is being attacked by a large muscular black and white lemur. The snake flees. The lemur picks up Julien, thanking him for saving his life and introducing himself as Koto. Julien introduces himself, before jumping into his arms as lightning strikes. Koto tells him he knows a place where they will be safe. As both lemurs left the scene, Sage glares menacingly at the two.

In Maurice's hut, Maurice, Clover, and Mort are gathered inside for shelter. They worry that Julien is out in the storm, as that he would have never listened to them. Maurice and Mort start to weep, believing he is soggy and dead, so Clover declares she will find him. She leaves.

A little while later, Julien and Koto sit together in a cave, a small fire blazing. Julien complains that the fire is small, and that a bigger one will let his tribe know that he is safe. Koto claims he is the last of his kind, and Julien, sympathizing, tells him he is welcome in his kingdom. Just then, a noise is heard from outside the cave, Clover. Koto rushes over, trying to fight her off. Upon realizing who she is, Julien attempts to break up the fight. Just as Clover is winning, Koto knocks back, burning her foot in the fire. Julien steps in front of her, reprimanding Koto. Clover is shocked that he knows this savage, but Julien tells her he "makes friends everywhere he goes". Clover attempts to stand, but her injured foot causes her to fall over. She lands in Koto's arms, as he asks her if she is injured, complementing her ability to fight. She sits down, as Koto prepares a paste to heal her foot burn. He begins gently massaging her foot, to Clover's delight. Now content, she tells them they wouldn't be at risk if they stayed a while longer. She lays back as Koto resumes his massage.

The next morning, Maurice divides the kingdom up into search parties to look for Julien and Clover. Willie finds the two in seconds, as they walk back into the kingdom. Maurice throws himself on Julien, crying. Clover asks where the rest of the kingdom is, and Maurice tells her that when she did not return, they formed search parties. Clover is outraged, believing he was doubting her ability to do her own job. She calls the others back. A giant snake in the jungle is seen choosing his first victim.

Later, Koto and Julien sit in the royal hot tub discussing the kingdom. Koto observes how poorly defended the kingdom is, with Clover doing all the work and more. Just then, Clover, appears with a towel around her shoulders, ready to join them. She pushes Julien aside to cuddle up to Koto. Not far behind her, Sage arrives, ready to join them as well. Koto greets him, calling him his birth name: Babak. Sage tells them that Koto should not be there, as he is simply disguising himself. He tells Julien to banish him, evoking anger from Julien. Julien tells him Koto's kingdom was wiped out, and Sage asks how he could let that happen. He reveals they are brothers. The other two look in confusion at the pair, before Julien says he does not understand.

In the jungle, Horst witnesses the huge snake gobble up another victim.

In the plane, Sage is telling Julien that Koto is his younger brother, and that he is not to be trusted. Julien asks if Sage is just jealous that Koto has managed to impress Clover and take her on a date.

On a mountain, Clover and Koto eat lunch together. Clover questions how Koto's kingdom got wiped out as he is an excellent fighter. Koto shushes her by putting a paw on her face, asking if she finds him untrustworthy. She tells him she does, and melts into the table watching him. Koto complements her large appetite, and asks how she manages to watch over the whole kingdom. Clover then suggests they head back to the village, but Koto leads her away, a different idea in mind. A number of lemurs are being held hostage by the fossa, who are ready to eat them. Clover and Koto crash the gathering, punching the fossa and saving the lemurs. They continue their day of fighting and play fighting.

In the kingdom, Maurice tells Julien something is off. Sage appears and agrees with Maurice, noting that the villagers are disappearing. He tells them Koto must be behind this, earning disbelief from Julien. Just then, Koto arrives with Clover, telling Sage he is just jealous of him for his date with Clover. Sage tries to hide his jealousy by pretending to confuse Clover with her sister, before asking Koto what else he should be jealous of. Koto claims he should be jealous of his bravery, and the two brothers begin to square off to each other. Clover immediately realizes what they are really fighting over, her, and tries to break up the fight by stepping between them. Just then, a fattened snake slithers by, having already eaten most of the citizens. To impress the brothers, Clover volunteers to fight the snake, running over and jumping. The snake merely swallows her whole. Julien prepares to grab his barrel. Before he can, both brothers begin fighting each other, both attempting to rescue Clover. In the midst of their wrestling, they rescue every citizen except Clover. Just as Sage believes everyone is free, Koto barges into him and locks him in an outhouse. As the snake tries to eat him, he pries their mouth open and pulls out Clover. He invites her to help him finish the job of getting rid of the snake.

A little later, a vanquished snake lays helplessly tied in a knot. Clover comments that she and Koto make a good team. They look dreamily at one another before Koto tries to kiss Clover. She pushes him away, still covered in saliva and stomach acid from the snake. She tells him she will be back.

A while later, Koto has the snake in a bag to carry away with him. He offers Clover, now clean, an invitation to join him. She declines, saying that the kingdom is still in need of her protection. He tells Clover he will return for her someday, and they hug. Sage, now out of the outhouse, looks on in envy, telling Koto he will watch him like a hawk. Julien invites Koto to return any time he likes, before Koto calls a black hawk to take him home. Julien congratulates himself for saving Koto's life while Clover looks down and walks away.

Koto returns to his mountain lemur kingdom, and dumps off the snake to Benson, his one of his henchmen. He tells him he tracked his snake halfway across the island, and that he must take better care of the snake. Koto then tells his army he has found their next conquest, a luxurious kingdom with a harmless ruler and only one source of protection. His army cheers. 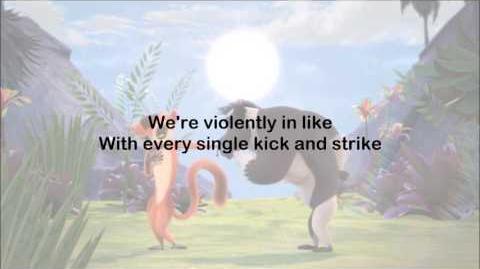