Madagascar Wiki
Register
Don't have an account?
Sign In
Advertisement
in: Episodes, Episode focusing on Penguins, Episodes focusing on Lemurs, The Penguins of Madagascar Episodes
English 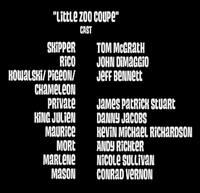 King Julien wants to drive the penguins' car, but the penguins refuse. So, he steals Alice's zoo kart and challenges the penguins to a race: winner takes the loser's car.

The penguins are test driving their toy car around. A very bored King Julien sees them and wants to drive their car. When Skipper denies his request, Julien just steals Alice's zoo cart and challenges the penguins to a race after he calls their car "babyish" and Skipper bets that it can "run circles around that monstrosity".

The penguins transform their car into a hot rod. They race King Julien whom cheats by having Mort and Maurice throw/spit bowling balls/chewing gum at the penguins. Rico uses explosive beans as a rocket to get take the lead but Phil throws a banana peel on the track causing them to spin out and stop just ahead of the finish line. King Julien wins the race. Kowalski chastises Phil for making them lose the race and tells him he can't go throwing his banana peels around willy nilly. He crashes the zoo cart into a wall. But knowing that he won, he takes the penguins car and tries out a "pushy button" with his face on it. This button turns out to be a lemur ejection switch, an idea by Kowalski and he is thrown out of the car into the air and lands on the ground.