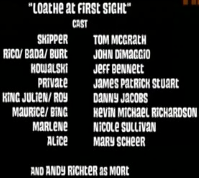 In an effort to make Doris the dolphin wish to be more than just friends with him, Kowalski invents the "Love-u-Laser," a device designed to render the subject of a laser blast in love with a pre-selected target. But after proving its capabilities on few zoo subjects, Kowalski is ordered by Skipper to reverse the actions. But in the process of doing so, the Love-u-Laser jams and then fires unexpectedly at Private, who within moments angrily tackles and yells at Kowalski. Kowalski believes that Private's state can be reversed, but after some interference from Private, he manages to pour the necessary compound for the Love-u-Laser, it once again malfunctions, casting its beam of hatred across the zoo and resulting in Kowalski being violently loathed by everyone else. As they surround him wishing to do him harm, the Love-u-Laser's effects are finally reversed when it falls into the fountain and causes a loathe-reversing beam to be cast across the zoo.