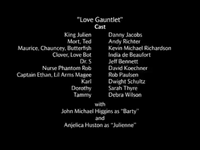 Oh Brother Where Aren't Thou?

King Julien tries to get rid of his parents, but when evil Karl traps them in the Love Gauntlet, they must prove their family’s strength to survive.

King Julien is panicking that his parents are coming over for another visit. Maurice, on the other hand, is in a state of hallucination, panicking that bells are ringing. When Clover asks why Julien is panicking, he says his parents are being too "parenty" towards him. In a montage of flashbacks, King Julien is first seen getting a bath from his parents, then with his boombox having an "episode" (with his parents dancing to the classic music). Next he gets his teeth cleaned painfully by Doctor S. Then his parents arrive, and Maurice panics that they "have a bell" and jumps out of the airplane. His parents enter, and Julien asks Clover to ask them when they are leaving. They reply by saying their stay will be "permanent" much to Julien's horror.

Later that day, Julien plans to "fake-nap" his parents in order to scare them away, thinking the island is too terrifying. They hire Dorothy and Ted to "fake-nap" them.

Meanwhile, Maurice is getting treated by Nurse Phantom and Doctor S, and tells them that Julien's parents had a "bell" of some sort.

Back at the plane, Clover is telling the group the plan to "fake-nap" the couple. Ted constantly interrupts Clover. She plans that once they have the couple, they will rendezvous back at the airplane. Clover won't be able to go, because Julien's parents know her face well, so Dorothy and Ted are on their own. Mort suggests a they use a glove. Then, Clover decides they should ambush and grab them as they walk by.

The scene cuts to Julien having a conversation to distract his parents, while Mort powers a wagon towards Julien's parents, only to miss and fall of a cliff. The group ends up injured.

They decide to try again, this time sneaking into their bedchambers at night. However, back at the plane the next day, Julien discovers that they captured Tammy and Butterfish, not Julien's parents. Julien, who is frustrated, fires his team members. Clover decides to just do it herself, as nobody else seems capable.

That night, sneaking into the correct hut, she pulls away their blankets, only to find fake models of them. Karl shows up out of nowhere. Realizing Karl took Julien's parents, she realizes she is too late and Karl's bug Chauncey releases a closet onto her, knocking her out.

The next day, Julien and Mort discover the fake models, and Clover knocked unconscious along with a letter from Karl. It says if Julien wants to see his family again, he needs to use the pop-up book to get to Karl's lair. He immediately follows the compass towards Karl's lair.

Back at the Cave, Doctor S is still trying to get Maurice's bell problem under control using different pictures, but to no avail. Doctor S realizes he is "one sick individual" and commands Nurse Phantom to wheel in a gurney with extra straps.

Julien continues looking for the lair until he is standing right in front of it. Julien barges in, thinking the couple are suffering only to find they are drinking. His father reveals they knew Karl for many years. When his mother asks him why he didn't mention Karl lived close by, Julien responds by saying he is a "crazy psycho that tried to murder me, like, a gazillion times". When Karl asks he take the seat nearest to him, Julien rebels by saying he would prefer to stand. When his mother scolds him, Julien finally decides to sit in the specific chair. Karl then reveals that the trio are at "last moment of the rest of their lives" and activates a trap door that makes them fall down into a pit.

Back at the cave, Mort is happily trimming Clover's fingernails while telling her a story. Clover can hear him, as she eventually grows annoyed and wakes from her sleep. Clover accidentally punches Mort in the face with her sudden movements. She immediately asks where Karl is, and Mort responds by giving her the note he and Julien found while she was asleep. Out of instinct, Clover tries to walk out and help, but she is still dizzy and falls over.

Meanwhile, Maurice is being strapped to the gurney, with Rob trying to convince him to try his delicious appetizers. Maurice responds with a harsh "no". Dr. S begins his operation and first tells Maurice to think far back. When Maurice tells him what he saw was crazy, Dr. S orders Rob to shock Maurice. After recovering, Dr. S asks again what happened. Maurice decides to tell his backstory. He was in the jungle, and fell down this hole in a tree stump, only to find the hole was going on forever. When he finally hit the bottom, he saw a group of bells with eyes. He ran, with the bells in pursuit of him. Dr. S thinks this was indeed crazy and tells Maurice to never tell the story to anyone again. Rob once again activates the electrical surge, telling Maurice to speak to him nicely.

Julien's family trio finally reach the bottomless pit, with a robotic machine, a door, and a sign saying "LOVE GAUNTLET". Karl welcomes them, and tells them they must prepare to answer a series of difficult questions he came up from knowing Julien, or they will face death. The couple clap. In a flirting voice, the "Love Bot" asks "What is Julien's favorite color?" His father replies by saying "wealth" only to get it incorrect, as Julien explains that pumpkin is his favorite colour. Part of the floor starts to move, revealing a lava pool. The robot asks, "What is Julien's favorite song?" His mother replies, "pass". With Julien giving her an annoyed look, she says that she panicked. The robot continues asking questions, all of which the family get incorrect.

Meanwhile, Doctor S is showing many pleasant photos to Maurice, who's eyes are being held open by sticks. When he tries to look away, Dr. S says that he needs to face his fears. He then makes the montage faster, and Maurice screams. After it gets extremely fast, Maurice suddenly says it worked, and he that feels better. When Dr. S rings a bell, Maurice completely ignores it. He leaves the cave happily.

Back at the Love Gauntlet, Julien's parents keep getting each one of the Love Bot's questions wrong. After 6 times, the trio are on the edge of death, with their chairs sinking into the lava. Karl enters through the door and says he did this just to prove that both him and Julien were never loved by their parents, which saddens, but also surprises Julien to hear that Karl's parents never loved him too. A depressed Julien decides to just get this over with. Love Bot asks the final question: "What was Julien's favorite stuffed animal as a child?" His parents think hard, and they remember it was a stuffed hippo that Julien called "Booty-Butt". They get the answer correct, and the LoveBot tears up, malfunctions. It begins to self-destruct. While the trio keep hugging, Chancey says that it was a terrible idea to put real tear ducts in the robot, and he and Karl escape through the path they came through. A ladder drops down on the trio as a love song plays. They make it out before the robot self destructs.

Unfortunately, Captain Ethan, Lil Arms Magee, One-Eyed Simon, and No Name Jack appear as a backup plan from Karl. Ethan is still angry that Julien stole his ship and crew, and dives at him. Julien's parents pull him out of the way, and Ethan jumps into the volcano, instantly being killed. Frustrated, Karl angrily orders the remaining three to kill Julien and his parents. Julien manages to convince them to get Karl and Chauncey instead, only by promising them a trophy afterwards. Swearing revenge, Karl and his little bug run from the trio.

At the beach, Julien rewards all three pirates trophies for their work. Clover and Mort arrive at the scene. Julien hugs his parents, but they quickly escape his grasp seconds later. They board the ship to go home, and bid farewell to their son. As Julien says things can finally get back to normal, Maurice excitedly arrives and says he can hear no more bells and asks isn't it great, with Julien saying it's great, although he doesn't know what Maurice is talking about, but he's okay with that.

Underground, the bells think that Maurice betrayed them as the "chosen one". They tell each other that he will not betray them when the time is right. Ringo starts laughing maniacally and the bells start ringing and the scene ends.