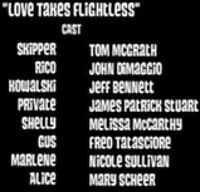 Shelly the ostrich has a crush on Rico and disposes Rico's doll in order to eliminate the competition for Rico's heart.

After Shelly the ostrich gets her head stuck in drying cement, Rico frees her by breaking the cement apart with dynamite. She immediately becomes smitten with him and, after Marlene suggests she tell him how she feels, seeks to win his affection by building a chewing gum sculpture of him and singing him a song. He however finds her actions overwhelming and even a little scary, and she soon learns by listening to Skipper and Marlene that Rico is instead in love with a plastic doll.

To eliminate the competition for Rico's heart, Shelly disposes of Miss Perky in a recycling dumpster and continues to try to get Rico to notice her, but Rico focuses only on trying to find his missing doll. Eventually Marlene talks to him, advising him to give Shelly a chance, reminding him that a relationship with a real person is better than being with a doll, and Rico is prepared to admit she might be right.

Shelly however is filled with guilt after she's seen how unhappy Rico is without Miss Perky, and confesses to taking the doll, and helps the penguins recover it from the recycling truck after the dumpster is emptied. Shelly then procures her own doll partner from a toy store, which Rico sees as crazy.