View source
watch 01:33
Wiki Targeted (Entertainment)
Do you like this video?
Play Sound 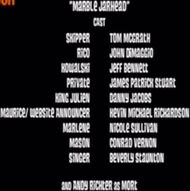 Rico is excited about a new line of princess accessories for his doll. In pursuit of these new accessories Rico goes psycho and puts the entire team in trouble.

The penguins are speeding in their car to dispose a thermonuclear bomb (in sardine can-form), built by Kowalski. Rico, who's driving suddenly spots a Princess Ms. Perky accessories poster and instead of getting the radioactive can to safety, he impulsively turns the car around towards the nearest toy store, despite his friends' best efforts to deter him. As soon as he stops in front of the store, the bomb goes off.

The penguins survive because Kowalski's bomb wasn't as powerful as it was supposed to be. Rico is court martialed, and Skipper puts him marble jar probation. Kowalski explains (complete with game-show sound effects) that if he shows good behaviour, he'll get a marble for it (dingdingding!), but if he misbehaves, then a marble is taken out (buzzer noise). Hence, Rico has to control himself and be on his best behavior until the jar is full so he can get his doll accessories as a reward.

Rico keeps on his best behaviour under threat of a marble being removed from the jar, generally being more helpful and restraining his violent, trigger-happy, pyromaniacal tendencies. However, as expected, he has a few slip-ups, such as him destroying Private's card stack and ravenously eats Kowalski's lunch, though he makes up for them in both situations.

Later, Private was talking non-stop about Lunarcorns near Rico, who was trying to make repairs to the car. Out of annoyance, he slaps Private, prompting him to try to remove a marble but Kowalski and Skipper add a dozen more and forced him to put it back, partly because they were getting annoyed too and also because the rest of the team was biased against the Lunacorns. By then, the jar is half full. However, Rico loses his self-control when he sees a commercial for Princess Ms. Perky and goes ballistic, forcing his friends to restrain him. At the same time, Julien pops in to ask for money before seeing the commercial, making him conclude that Rico's doll is a princess. The penguins chase him out before he could get the money and ask about Princess Ms. Perky.

The lemurs enlist the services of the chimps with a large bowl of fruit to search the internet for more information. Listening intently to the fictional biography of Princess Ms. Perky, Julien erroneously deduces that the penguins "kidnapped" her from Glamortonia, so he decides to rescue the doll to take half her kingdom.

Rico meanwhile, does cleanup and repairs to the damaged base, refusing even when Skipper offers him a break to play cards, much to Skipper's delight to avoid procrastinating on his task. While the other penguins and Marlene play Stomp the Wombat in the next room, the lemurs burst into the headquarters, declaring their intentions to 'rescue' the doll. Rico resists their attack, but is limited as he can't use full blown violence, especially with the others listening. The others, oblivious to Julien's intrusion, hear the sounds of battle and mistake it for Rico having another episode. ("That better not be flamethrowing I'm hearing!") Ultimately, Mort gets the drop on him with a pineapple on a chain, enabling the lemurs to flee with the doll. Rico then completely loses it and goes berserk, letting it out all over the adjourning room, causing a big mess,knocking everyone down and spilling all the marbles. He then chases after the lemurs to a toy store, where they take refuge in a cardboard castle. While the idiotic Julien has a one-sided conversation with a male doll for Ms. Perky's hand in marriage, Mort attempts to fend the penguin off with glitter in place of hot oil, before he storms the castle with a mallet, and knocks the outward-opening drawbridge inwards. Rico then tears apart the male doll and threatens Julien into giving back his doll with the male doll's leg.

Rico then exits the castle to find his friends waiting for him, having saw the whole thing. Skipper and the others applaud the necessary and well-used violence, but inform him that the marble jar rule is still in place, and that Ms Perky wouldn't be getting any accessories until the jar is full. In response to that Rico regurgitates up a stick of dynamite, destroying several more jars of marbles on the shelf, sending down a marble hailstorm and filling their jar to the brim. His friends agree to let him off the hook on a technicality. Rico then gathers up his doll accessories and dances with her as Julien declares that he's satisfied and Rico can take her.