Madagascar Wiki
Register
Don't have an account?
Sign In
Advertisement
in: Episodes, Episodes focusing on Kowalski, The Penguins of Madagascar Episodes 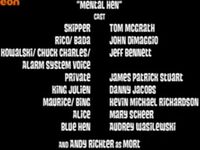 The Terror of
Madagascar

A hen who seems to have psychic abilities moves into the zoo, and a skeptical Kowalski tries to prove she's a fraud.

Bada and Bing are busted by the Penguins on a midnight sneak-out. The Penguins attack them and think that a hen is under attack. They force Bada and Bing to tell them what they were going to do. It turned out they were just bringing bowls of chicken feed for the hen, who is called a psychic, to determine the outcome of a baseball game that hasn't happened yet.

The hen proves herself psychic with amazing powers, as she first finds Kowalski putting down a Jack of Clubs, then an Ace of Spades left in the card box. The chicken then points out that King Julien was the one who painted a mustache on his face. Finally, Kowalski video-records the hen and posts the video on the internet, but instead of showing the chicken as a fake, it just encouraged visits.

A company finally decided to buy the hen if she proves that she is a psychic. Kowalski, however, finds a stockpile of notepads and dossiers of everyone in the zoo and said the hen would be 20 times smarter than everyone in the zoo combined and claims that's even more disturbing and the hen confronts them. The hen happened to be reaching a goal by hoping some sub-genius would post her on the internet, so she could dominate the news media system and then head off to the White House & become chicken president.

Skipper however, tries to outsmart her, but she mimics everything the penguins say at the exact time they say it. Kowalski then decides to fool the hen and prevent her from choosing the boxer that was guaranteed to win by dancing, using what he called "the most irrational weapon of all".

But Alice grabs Kowalski, and the hen chooses the right bowl, but Kowalski reveals that he made a distraction so Rico could switch the bowls and she'd picked the loser. The hen threatens to have revenge for what Kowalski did sometime later, but compliments his dancing, then she starts kissing him. While that was happening, Rico covered Private's eyes.