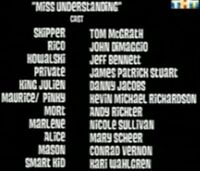 When Alice announces to a tour group that there are three boy penguins and one girl penguin and a machine points him/her as the female, Skipper goes to Marlene for help with finding his/her inmost being.

After Alice's states to a visiting school group that the zoo has three males and a female penguin, the guys are confused as to which one of them is the female. After Kowalski builds a DNA tester, it claims that Rico, Private, and Kowalski are all males and Skipper is the girl.

Kowalski attempts to hide the results, but Skipper pushes him out of the way to look and is very shocked. They perform another test to see if he is a girl or not. Blindfolded, Skipper must put a thumbtack on one of two sides of a canvas. The monster truck side is shown, but it is then revealed that he pinned the pink unicorn instead.

Skipper starts going through five stages of grief. The penguins go on dangerous missions, but Skipper acts very ladylike and causes them to fail. Meanwhile, King Julien tries to make his blender work. Skipper then leaves the penguin's habitat to go visit Marlene and see what it's like being a girl.

Marlene becomes very annoyed because she knows Skipper is a boy. Marlene takes Skipper to see the lemurs. They see that the wires gone out of control and nearly kills Julien, Maurice, and Mort. Skipper, still believing that he is a girl, decides that the mission is not ladylike enough.

Then Rico, Kowalski, and Private show up to save the lemurs, but end up getting stuck too. Eventually, Skipper decides to take off his pink bow and makes an impromptu whip/dance ribbon. After that, the penguins take Skipper to do the test again and find a broken fuse thanks to Julien for his blender must have overloading the circuit.

After they replace the fuse, the machine draws a vertical line through the minus sign, completing the plus mark and proving that Skipper is a boy. Marlene then becomes sad, hoping Skipper could be her friend.

Skipper then hugs Marlene saying that Alice doesn’t know what she's talking about because she's a mammal. Marlene becomes offended by this after Skipper says that they're all morons, and pushes Skipper. Private tries to hold Marlene back and says, "We'll work on that one tomorrow."