Mort's love for feet is so extreme that, while sleeping, he can rip down a tree to get to them, as seen in "Two Feet High and Rising." King Julien also hates it when Mort touches his feet. Mort is protected by a "force field" of ignorance and can't feel pain, but he still hates drowning, as seen in "Assault and Batteries." He laughs hysterically a lot. (In Madagascar: Escape 2 Africa, while being chased by a shark and laughing, while at the same time, he says "Why am I laughing?!?") He likes things even if he doesn't know what they are. He says "I like [fill in]!". (i.e. In "Tangled in the Web," he says "I like computers!" despite not having a clue as to what a computer is, and claims "I don't have to know to like.") 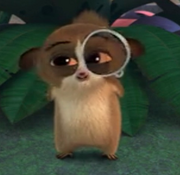 In All Hail King Julien: Exiled, it is revealed that Mort is of a species that can absorb other Morts in the multiverse. However, Smart Mort, and later “Groovy 60's cult leader” Mort, also known as Hippie Mort, are two alternate versions of Mort, created by him due to the effects of both coffee, and tea (also known as brown julien, and gold julien) in both One More Cup and it's sequel episode. Smart Mort is an intelligent character, while “Groovy 60's cult leader”/Hippie Mort is a peaceful character. It is also revealed that Mort absorbed his own grandmother, and now she lives inside his mind. Mort is also portrayed to have some traces of Jewish heritage, as seen in Karl-Mageddon, after his grandfather shows up and a flashback appears of Mort as a child getting a present on Hanukkah from Grandpa Mort.

However, in All Hail King Julien: Exiled, he becomes one of the significant characters who assist King Julien, by getting information and spying on the enemy, Koto, while he acted as his jester. Mort was able to plot plans to assassinate Koto, but was unable to be successful due to his bad luck. Mort was clever enough to generate tactful plans in trying to free the prisoners in various ways. He played a crucial role in collecting an army (the Mort Horde) for the war against Koto. His actions helped King Julien, leading to his victory.

It is indicated in Revenge of the Prom that Mort was abused by Grammy Mort, leading to her consumption. He creates a romantic relationship with Zora in the All Hail King Julien: Exiled and marries her in The Day Before Tomorrow. However, in King Julien is Watching You, Zora leaves Mort and decides to live with Uncle King Julien. But Mort doesn't really seem to mind that.

Mort is attending a party with King Julien and the people of the kingdom. Suddenly, the fossa attack them and the lemurs are surrounded by the fossa. When he is just about to be eaten, Alex comes to talk with the fossa, allowing him to escape. When King Julien wants to see the true character of the Zoosters, he kicks Mort towards Alex. Alex tries to cheer him up but causes him to cry. After he is comforted by Gloria, the lemurs surround them.

Back at the plane, he even gets shouted at by King Julien since he states that he loves the Zoosters more than anyone and King Julien hates them compared to how much he loves them. This annoys King Julien. Compared to his witty character in All Hail King Julien, he seems to panic easily since he screams in fear when King Julien reminds them how they are dreaded by the fossa.

When Alex performs at the foot of the Central Boabab Tree, he bites Marty. When the whole kingdom sinks in silence, he claps, which adds humor. Later, when Alex roars, he says that he is "going savage", causing all to run. At the end of the film, Alex decides to eat sushie. King Julien offers Mort to Alex, as a plan B, so he could eat him. This event adds humor.

Mort tries to get into the plane, but King Julien tries to stop him using the security. However, he escapes them and tries to get in the plane. But King Julien closes the door in time. Mort hangs on to a wine and end up on the left wing of the plane. Alex sees him and thinks him to Gremlin. Alex says "Hi Mort" and he says "Hi", causing him to fall from the plane. In the middle of the film, he crawls and manages to get on to the shore. He says that he is coming "King Julien." Out of the blue, a shark begins to chase him and adds humor. The movie progresses and he ultimately meets King Julien and Maurice. But the shark had followed him, as a result, the shark end up inside the volcano. At the end, King Julien, Maurice and Mort are seen, riding a flamingo.

Mort is the first person to use King Julien's Love Potion No. 09. King Julien persuaded him to take it by saying that he is not popular, which he agrees with. After been sprayed, Maurice comes as a lady to show that he is irresistable and King Julien make Maurice even kiss him. At the end, he smiles when all the fur of King Julien gets lost since he had to bath his own new potion.

Mort first appears when they jump out of Alex's cake with king Julien and Maurice to surprise him. When they were at Monte Carlo, Alex says not to draw attention, but King Julien, Maurice and Mort sets outs fireworks and begins to play a song, when they were in a swan boat.

King Julien, Maurice and Mort were sent out to stop the power flow and he had a clock strapped to his head so an alarm would ring when the time is ready. When King Julien cuts the power, Mort takes control and pulls the power lever up and down, when King Julien and Maurice dance. Later, when Chantel clings with Melman, King Julien sends Mort to fix the problem. He succeeded.

Later, when the plane crashes, he is stuck to a pipe and searches King Julien. In the circus train, they gets into Sonya's apartment, thinking it is first class. When Julien acts weirdly with Sonya, Mort and Maurice are stunned. Since then, Mort has a much closer contact with Maurice and at the end, Mort takes Chantel's pistol and uses it to tranquilize Chantel at the end.

He appears in the mid credit scene. The Penguins use him as the source of cuteness to bring back Private to normal, who now has antlers. King Julien tries to press the button and finally succeeded. After the penguins left, King Julien says to Mort that he expected a "little more pizzazz". Then, Mort eats King Julien in one gulp and amazes King Julien since it is 'pizzazz".

Mort is so cute and popular that he was put on the cover of the zoo brochure in The Penguin Stays In the Picture. His plush toys are a popular sale in the zoo, and he even has a t-shirt design. Visitors to the zoo comment on how adorable he is just as much as they do on Private.

In the zoo, Mort still has his negative personality. Not many animals in the zoo know who he is, but all of the main characters do. Like in Madagascar, Mort loves to touch feet, especially King Julien's. His love of King Julien's feet started when King Julien kicked the Foosa away, therefore saving Mort's life. This event happened in the first episode of All Hail King Julien, "King Me." Mort is known as an unlucky character who is often a victim of terrible events, in the end of most of his appearances.

Although Mort is both disliked and pushed around by King Julien, he does not seem to be bothered by it. However, he did turn on Julien in Mort Unbound when Kowalski's giant ray granted him super strength and size. He was shrunken down again with an antidote. He didn't want to be himself before, but in the end, he is happy of what size he is.

A big reason why Mort likes King Julien is because of King Julien's feet. Because of this, he always volunteers to help King Julien. Although King Julien dislikes him, he actually enjoys Mort worshiping him, as he has confessed many times. King Julien has also cried over Mort when he thought he was dead, in the All Hail King Julien episode "Diapers are the New Black”.

In All Hail King Julien, while he's still depicted as a cute character, he also has some more creepy aspects to his personality. But still funny as he always is. For example:

Mort also has multiple versions of himself inside his mind. Sometimes he even talks with these other versions of himself. It is revealed during All Hail King Julien - Exiled that these Morts are alternate universe versions of himself, whose essences he consumed (and he has also done this to close relatives like his Grandma Mort and Grandpa Mort). At some undisclosed time, Mort however lost all his memory and cannot remember how he did this.

The known versions of Mort are:

When he talks with his alternate personalities, it often makes the person(s) looking at him feel unnerved, such as in Fast Food Lemur Nation and Who Arted?, because it is seen that Mort moves from place to place and changes his face. It is revealed in All Hail King Julien: Exiled and Lord of the Fruit Flies that there are a large number of different Morts inside his head.

Zora - In All Hail King Julien: Exiled, Mort came up with the idea to seduce Zora by telling her that he wants to marry her, so that he can get tools to help the prisoners escape. The next day, Mort and Zora have a fight to the death, which ends with Mort barely moving Zora. Amazed by his “strength” (he was catapulted her way and could barely even get close to her), she licks him and claims him. Mort takes the opportunity to take her key while she is sleeping, but then apologizes and calls her "darling". After Koto's death, they share kisses and marry. However, Mort seemed unhappy with his marriage to Zora in King Julien is Watching You, as it shows him making a schematic drawing of Julien's foot while in Clover's compound prison. After Zora falls in love with King's Julien's uncle, Mort cries out for Zora until he laughs triumphantly, free from Zora for good, explaining Zora's absence in the films and specials. 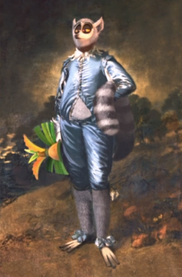 Though his only ability is to dance in the films and TV Series, Mort is surprisingly skilled in All Hail King Julien than in other films or TV Series, particularly in the following ways: