Madagascar Wiki
Register
Don't have an account?
Sign In
Advertisement
in: Episodes, Episodes focusing on Mort, The Penguins of Madagascar Episodes,
and 4 more 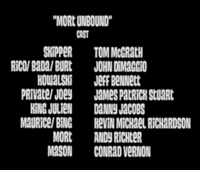 Mort accidently becomes Kowalski's test subject because he was trying to retrieve King Julien's Mango and becomes very buff. Julien seeing this advantage, he uses Mort's new-found bulk to bully the other zoo animals to get anything from them.

Kowalski has invented a super ray that will enhance the nutritional value of fish and increase their size. Skipper simply thinks Kowalski has lost his mind and whispers to Rico to keep an eye on Kowalski.

While throwing out fruit he does not want, King Julien suddenly decides he does want a mango. King Julien has Mort go retrieve it from the gorilla pen.

Bada and Bing think that Mort is a thief and bounce him out of their habitat. Mort ends up landing in front of Kowalski's now active invention. Mort grows very large in size and becomes very muscular.

Mort goes back to the gorilla pen to retrieve the mango and takes the gorillas literally when they suggest he beat them up for it. After a solid thrashing the gorillas give Mort some bananas and other fruit.

King Julien realizes that Mort can use his size to bully the other animals and uses Mort to steal peanuts from Burt the elephant and hay from Joey to the kangaroo.

Kowalski can't figure out the antidote for reversing the ray's effects. Private tastes the antidote and suggests adding sugar to the tart liquid. Sugar turns out to be the ingredient the formula needed to be effective.

While Julien is enjoying Mort's loot, Mort asks for a banana and his request is denied. Mort became furious and refuses to be bullied by King Julien anymore. Mort takes the fruit he deserves and forcibly cuddles Julien's feet. The penguins arrive with the antidote but Mort wants to stay big. He fights off the penguins one by one until he reaches Private who he throws into the penguin habitat and into the super ray. Private is now extremely large and muscular just like Mort. Private forces Mort to take the antidote. Mort then shrinks down to his normal size and regales at being normal again. Julien tries reminding Mort that it's not good to be a bully. However, Maurice reminds him that already used Mort to bully everyone else. Julien tries shifting the blame away from himself, but a few stomps from Private make him cowardly admit his guilt.

Now there is only one problem... Private refused to become normal again and it ends with Rico saying "Oh boy".