Madagascar Wiki
Register
Don't have an account?
Sign In
Advertisement
in: Episodes, The Penguins of Madagascar Episodes 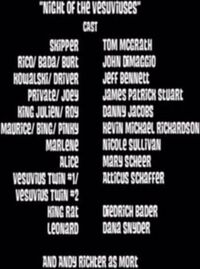 The Vesuvius twins buy up all the tickets to the annual zoo sleepover.

The animals prepare for the Annual Zoo Snooze, but they find out that the Vesuvius Twins have purchased all the tickets. Kowalski notes that they had shaved Marlene's tail, greased the Gorillas' swing and painted Pinky green.

All the animals except Private decide to get revenge on the twins and lay some serious hurt on them. Private wishes that they could plant a seed of good into the twins, in which for some particular reason Skipper agrees. The penguins freeze the twins with Kowalski's Freeze Ray and escape with a smoke bomb.

The penguins get on top of a tree branch, until Kowalski calculates that the branch wouldn't hold the weight of them and the twins, thus causing them to fall. They then go down the sewers and use the twins as a raft and as weapons to defeat the rats.

When caught by the animals, they use rockets to fly into the air, landing on the mats used as beds. After seeing the penguins' files based on them, the Vesuvius Twins decide to change their ways and start tormenting people instead of animals.