Madagascar Wiki
Register
Don't have an account?
Sign In
Advertisement
in: Episodes, Episodes focusing on Leonard, The Penguins of Madagascar Episodes
English 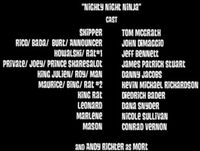 After watching a martial arts film with the penguins, Leonard starts sleepwalking in samurai fashion.

While he waits for his habitat to air out after the penguins accidentally bomb it with stinking fish, Leonard watches an all-night ninja movie marathon with the penguins. Although he initially dislikes the films, he craves more action when morning comes at the end of the marathon. When he then goes back to his habitat to sleep, he begins to execute martial arts moves against unsuspecting zoo animals while in a sleepwalk-like state. After Burt knocks him into the sewer, Leonard uses his moves to fight the Rat King before the penguins manage to subdue the koala and bring him back to the HQ to attempt to undo his ninja impulses by forcing him to watch eight hours of The Lunacorns. When the Rat King then seeks revenge against Leonard, Leonard ultimately defeats him again, only this time by freaking him out with love and hugs.